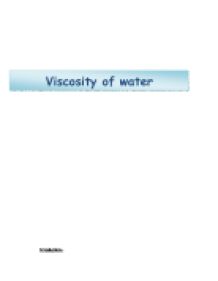 Viscosity lab. Research question:- How is the viscosity of water affected by changing temperature?

Introduction:- In this practical, the rate of viscosity of water will be evaluated and compared between hot and cold water. Research question:- How is the viscosity of water affected by changing temperature? Independent variable: Temperature Dependent variable: Time taken for 10ml of water to descend from the burette. Controlled variable(s):- * Type of liquid used (water in this case) (was obviously controlled by using the same liquid every time). * Type of material used (glass instruments in this case) (again was obviously controlled by using the same type of material every time) * Angle at which the stopcock is opened (at full 90 degrees) (was controlled by fully opening the stopcock at every trial) Material used:- -spherical burette (measuring from 0 to 250ml) (no relevant uncertainty) -burette holder. - graduated cylinder (measuring from 0 to 50 ml) (of uncertainty �1ml). -Water. - Stopwatch - cloth towel. -fire source to boil water. -safety equipment like : lab coat, protection glass, etc. ...read more.

- After all, the volume of falling water was read off the graduated cylinder using the naked eye, which have yielded some volume uncertainties. - The stopwatch was might have been triggered at wrong intervals as humans are subject to errors, yielding time uncertainties. Limitations:- - The used stopwatch gave numbers rounded to three significant figures, using a stopwatch with a larger number of significant figures could have gave more accurate values, - The used graduated cylinder had a relatively high uncertainty (� 1ml) using a cylinder with less uncertainty might have yielded more accurate results. Improving the investigation:- - Developing a better method for maintaining the heat of water (weather hot or cold) inside the glass burette. (maybe using material with a higher specific heat capacity would help). - Using a stopwatch with a higher number of significant figures. - Using a graduated cylinder with a smaller uncertainty value. - Developing a better method for opening the stopcock at the same speed for all trials to guarantee an equal speed for the flow of water. ...read more.