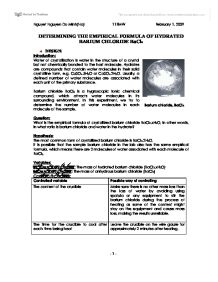 Water of crystallization of BaCl2.xH2O

DETERMINING THE EMPIRICAL FORMULA OF HYDRATED BARIUM CHLORIDE BaCl2 * DESIGN: Introduction: Water of crystallization is water in the structure of a crystal but not chemically bonded to the host molecule. Hydrates are compounds that contain water molecules in their solid crystalline form, e.g. CuSO4.5H2O or CaSO4.2H2O. Usually, a defined number of water molecules are associated with each unit of the primary substance. Barium chloride BaCl2 is a hygroscopic ionic chemical compound, which attracts water molecules in its surrounding environment. In this experiment, we try to determine the number of water molecules in each molecule of the sample. Question: What is the empirical formula of crystallized barium chloride BaCl2.xH2O, in other words, in what ratio is barium chloride and water in the hydrate? Hypothesis: The most common form of crystallized barium chloride is BaCl2.2H2O. It is possible that the sample barium chloride in the lab also has the same empirical formula, which means there are 2 molecules of water associated with each molecule of BaCl2. Variables: Independent variable: The mass of hydrated barium chloride (BaCl2.xH2O) Dependent variable: The mass of anhydrous barium chloride (BaCl2) Control of variables: Controlled variable Possible way of controlling The content of the crucible Make sure there is no other mass loss than the loss of water by avoiding using spatula or any equipment to stir the barium chloride during the process of heating as some of the content might stay on the equipment and cause mass loss, making the results unreliable. ...read more.

During that time, part of the water vapor trapped inside the crucible, with decrease in temperature, condenses, making the mass of crucible and its content increase. This partly explains why the mass of water lost in 3rd repeat is the same as that in the 2nd repeat (0.6g) where as the initial mass of crystal used was different. Improvements: _ Use greater initial mass of the crystallized BaCl2 in order to lessen the percentage error for the variables as much as possible. Suggestion: 5g - 6.5g - 8g. _ Include one more step at the beginning of this experiment. Heat the empty crucible with lid on first for 5 minutes with the medium flame, then with the strong flame for 5 more minutes. Let it cool for 2 minutes. Then take the reading for mass of the crucible and lid. As this is the same process as what we do to the crucible when it has the content in, the mass is more reliable. _ Use only 1 crucible throughout all the repeats. _ Open the lid for 1-2 seconds for each time the crucible is heated to ensure most of the water vapor is given off. _ Make sure the air-conditioner where the balance is put and where the flame is burning is off. This can avoid the unequal heating and also inaccuracies of the reading on the balance. Sources: Analytical Chemistry for Technicians - http://books.google.com.vn/books?id=ntiWXu-mxLwC&pg=PA15&lpg=PA15&dq=hydrated+BaCl2&source=bl&ots=3DcZ_EVqtW&sig=fBnTmTzURqZE5kG1fJlXko75HoQ&hl=vi&sa=X&oi=book_result&resnum=3&ct=result Chemistry 122: Percent water in a hydrate http://www.chem.latech.edu/~deddy/chem122m/L02U00Hydrate122.htm ?? ?? ?? ?? Nguyet Nguyen Do Minh(Na) 11EMW February 1, 2009 - 1 - ...read more.