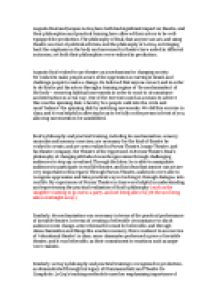 Augusto Boal and Jacques LeCoq have both had significant impact on theatre, and their philosophies and practical training have allowed their actors to be wellequipped for production.

﻿Augusto Boal and Jacques LeCoq have both had significant impact on theatre, and their philosophies and practical training have allowed their actors to be well-equipped for production. The philosophy of Boal, that anyone can act, and using theatre as a tool of political activism, and the philosophy of LeCoq, on bringing back the emphasis on the body and movement in theatre have ended in different outcomes, yet both their philosophies were realised in production. Augusto Boal wished to use theatre as a mechanism for changing society. He wished to make people aware of the oppression occurring in brazil, and challenge people to make a change. He believed that anyone can act, and in order to do this he put his actors through a training regime of ?de-mechanisation? of the body ? removing habitual movements in order to react to circumstance and interaction in a real way. ...read more.

My experiences of Forum Theatre in class were helpful in understanding and experiencing the practical realisation of Boal?s philosophy (such as the daughter wanting to go out to a party, and not being allowed, yet the son being allowed straight away.) Similarly, de-mechanisation was necessary in terms of the practical performance of invisible theatre. In terms of creating a believable circumstance to shock audiences into change, actors themselves must be believable, and through demechanisation and things like emotion memory, this is realised. In an exercise of ?educational theatre? in class, some classmates performed a piece of invisible theatre, and it was believable, as their commitment to emotions such as anger were realistic. Similarly, LeCoq?s philosophy and practical training is recognised in production, as demonstrated through his legacy of Mummenschatz and Theatre De Complicite. LeCoq?s teaching methods focused on emphasising importance of the body, and trainging his actors to be physically able to cope with the task of acting realistically. ...read more.

LeCoq used via negativa to encourage students to try and fail, and thus explore avenues they otherwise never would have. LeCoq?s legacy with neutral masks can be seen in Mummenschatz theatre, where his philosophy focusing on the body is realised. LeCoq?s philosophy and practical training are also realised in Theatre De Complicite, where le jeu, complicite and desponsibilite are all demonstrated. We were fortunate enough to see ?the Disppearing Number? and this production was an incredible example of how all the elements of mind, body, actor, audience, and space worked together in perfect unity, and the physical transitions were seamless. It was beautiful to watch, and highlighted the importance of the body in theatre, and the possibilities it brings. As can be seen, Augusto Boal and Jacques LeCoq both have significantly impacted theatre, and this is best seen in their legacy which realises their philosophy and trainging; Theatre of the Oppressed and Cardboard Citizens for Boal, and Mummenschatz and Theatre De Complicite for LeCoq. ...read more.