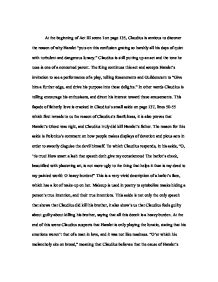 Describe the state of mind of King Claudius

At the beginning of Act III scene I on page 135, Claudius is anxious to discover the reason of why Hamlet "puts on this confusion grating so harshly all his days of quiet with turbulent and dangerous lunacy." Claudius is still putting up an act and the tone he uses is one of a concerned parent. The King continues this act and accepts Hamlet's invitation to see a performance of a play, telling Rosencrantz and Guildenstern to "Give him a further edge, and drive his purpose into these delights." In other words Claudius is telling encourage his enthusiasm, and direct his interest toward these amusements. This fa�ade of fatherly love is cracked in Claudius's small aside on page 137, lines 50-55 which first reveals to us the reason of Claudius's fearfulness, it is also proves that Hamlet's Ghost was right, and Claudius truly did kill Hamlet's father. The reason for this aside is Polonius's comment on how people makes displays of devotion and pious acts in order to sweetly disguise the devil himself. To which Claudius responds, in his aside, "O, 'tis true! How smart a lash that speech doth give my consciences! The harlot's cheek, beautified with plastering art, is not more ugly to the thing that helps it than is my deed to my painted world: O heavy burden!" ...read more.

However when the king is alone we see through his soliloquy on page 181, which uses Imagery and allusions, that Claudius is tortured by his guilt wants to repent. "O my offence is rank, it smells to heaven; it hath the primal eldest cures upon't a brothers murder." Claudius uses olfactory imagery using the word rank to mean foul, a smell so foul that it reaches to the heavens. The primal eldest curse is an allusion to the bible, in which Cain murders his brother Abel, quite like the way Claudius murdered his own brother. To further show his guilt Claudius continues, saying that his "Inclination be as sharp as will, my stronger guilt defeats my strong intent," Claudius admits to being guilty in this line, saying how even though he wants to pray he cannot saying that his guilt is stronger than his intent. Claudius then continues saying that "like a man to double bound, I stand in pause where I shall first begin." So even though he wants to pray, he also wants to get rid of Hamlet and doesn't know from which he wants to start. "Double business bound" means two things. Now Claudius uses a visual image, "what if this cursed hand were than itself with brother's blood." ...read more.

In this soliloquy we see that Claudius is cursing his deeds, and wonders if he can be forgiven even though he still has everything he gained from killing his brother. Claudius also knows that heavenly justice is different from the earthly kind which tends to be corrupt and unjust, and he wonders what chance he as being forgiven. He hopes that praying will ease his conscience. At the end of the scene Claudius makes the comment on how "My words fly up, my thoughts remain below: words without thoughts never to heaven go." By saying this Claudius has just admitted to having insincere words, and thinking of only earthly riches. Through out Act three, Claudius's state of mind seems to change depending on the situation, in scene 1 though Claudius seems a bit anxious to understand why Hamlet is acting "mad" he manages to put on a calm mask that hides his intentions. However after scene 2, Claudius lets that mask crack and we are finally let in to see what he is thinking, and we see that he feels tormented by the guilt that he feels over killing his brother, and wants to repent. However Claudius cannot truly repent without giving up the spoils he received from killing his brother, and he does not want to do that, and continues with his plot to send Hamlet to England to be assassinated ...read more.