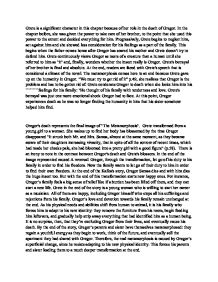 Grete is a significant character in this chapter because of her role in the death of Gregor. In the chapter before, she was given the power to take care of her brother, to the point that she used this power to the extent and decided everything for him. Progressively, Grete begins to neglect him, act against him and she showed less consideration for his feelings as a part of the family. This begins when the father comes home after Gregor has scared his mother and Grete doesn't try to defend him. Grete continuously views Gregor as more of a creature than a human until she referred to him as "it" and, finally, wonders whether the insect really is Gregor. ...read more.

Gregor's death represents the final image of "The Metamorphosis". Grete transformed from a young girl to a woman. She wakes up to find her body has blossomed by the time Gregor disappeared "It struck both Mr. and Mrs. Samsa, almost at the same moment, as they became aware of their daughters increasing vivacity, that in spite of all the sorrow of recent times, which had made her cheeks pale, she had bloomed into a pretty girl with a good figure" (p.58). There is an irony to note in the contrast between Gregor's death and Grete's blossom. In the end of the image represented caused A reversal. Gregor, through the transformation, let go of his duty to his family in order to find his freedom. ...read more.

As his physical needs and abilities shift from human to animal, it is his family who forces him to adapt to his new identity: they remove the furniture from his room, begin feeding him leftovers, and gradually help strip away everything that had identified him as a human being. It is no surprise, then, that they're excluding Gregor from their lives, and eventually cause his death. By the end of the story, Gregor's parents and sister have themselves metamorphosed: they regain a youthful energy as they begin to work, think of the future, and eventually sell the apartment they had shared with Gregor. Therefore, the real metamorphosis is caused by Gregor's superficial change, since he resists adapting to his new physical identity. This forces his parents and sister leading them to a much deeper transformation at the end. ...read more.