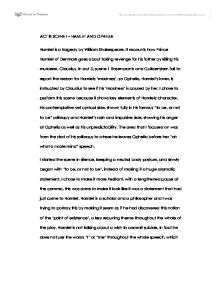 ACT III SCENE I - HAMLET AND OPHELIA Hamlet is a tragedy by William Shakespeare. It recounts how Prince Hamlet of Denmark goes about taking revenge for his father by killing his murderer, Claudius. In act 3, scene 1 Rosencrantz and Guildenstern fail to report the reason for Hamlets 'madness', so Ophelia, Hamlet's lover, is instructed by Claudius to see if his 'madness' is caused by her. I chose to perform this scene because it shows key elements of Hamlets character, his contemplative yet cynical side, shown fully in his famous "to be, or not to be" soliloquy and Hamlet's rash and impulsive side, showing his anger at Ophelia as well as his unpredictability. The area that I focused on was from the start of his soliloquy to where he leaves Ophelia before her "oh what a noble mind" speech. I started the scene in silence, keeping a neutral body posture, and slowly began with "to be, or not to be", instead of making it a huge dramatic statement, I chose to make it more hesitant, with a lengthened pause at the comma, this was done to make it look like it was a statement that had just come to Hamlet. ...read more.

The first is higher pitched, and said with a smile to show how hamlet is happy to be standing in front of his love, the second is more to himself, said with a more questioning feel to it, and the last is more for the audiences benefit who previously participated to his" to be, or not to be speech", said in a lowered voice almost through gritted teeth to show how Hamlet is thinking about the conclusion to his soliloquy, and the uncertainty of life after death. Ophelia has been instructed by her father to return several tokens of Hamlets love to him, this hurts Hamlet who thinks it odd and makes him start to question her motives; concluding that Hamlet might think that she might have a sent by someone else, at which point I look around stage looking for this 'other man' to show how Hamlet is cynical. At this point Hamlets anger comes out, which is where I raise my voice to a near shout, throwing the tokens, in this case, books, to the floor. Hamlet then tells her how he really feels for her, saying, "I did love you once" which is where I lock with the actress playing Ophelia to show how Hamlet is in ...read more.

Now Hamlet is resigned to not being able to trust Ophelia, so he returns to his previous way of abusing her. I again used this chance to show Hamlets hasher, angrier side. Emphasising his more powerful images such as "chaste as ice" where I elongated the sound of the sibilance. Toward the end of the scene is where Hamlet says a line that indicates that he is referring to the other person in the room; "all but one shall live". This shows how the aim of revenge is ever present in Hamlets head; I showed this by focussing all my characters attention on a spot that had previously been accidentally pointed out by Ophelia. In conclusion, I portrayed Hamlet as an impulsive and unpredictable character who did not always give the reaction expected by the audience. The scene contained a speech that was perfect to show Hamlets philosophical and cynical side, where key themes are introduced into the play. I also showed Hamlets ability to love through his relationship with Ophelia, where even though he knew she wasn't acting truthfully, he still gave her a chance to prove herself to him. And finally, I was able to show how Hamlet reacted in anger, which was the state that he is in for the better part of the scene, portrayed through a number of little venomous speeches directed at Ophelia. ...read more.