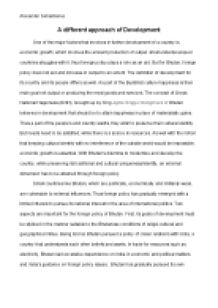 ﻿Alexander Sebastianus A different approach of Development One of the major factors that involves in further development of a country is economic growth, which involves the amount production of output. Most underdeveloped countries struggles with it, thus foreign policy plays a role as an aid. But for Bhutan, foreign policy does not aid and increase in output to an extent. The definition of development for its country and its people differs as well. As part of the Buddhist culture happiness is their main goal not output or producing the most goods and services. The concept of Gross National Happiness (GNH), brought up by King Jigme Singye Wangchuck of Bhutan believes in development that should be to attain happiness in place of materialistic gains. ...read more.

First, its goals of development must be stylized in the manner suitable to the Bhutanese conditions of religio-cultural and geographical millue. Being told so Bhutan persued a policy of closer relations with India, a country that understands each other beliefs and wants. In trade for resources such as electricity, Bhutan laid excessive dependence on India in economic and political matters and India?s guidance on foreign policy issues. Bhutan has gradually pursued its own distinctive path of development. Limited and controlled Bhutanese people witnessed change and development, in means of transportation and communication, development of educational institutions and health facilities, growth of agro based industries, expansion of banking and financial sector, steady growth of market economy are some of the activities which Bhutanese rulers have persued. ...read more.

Established diplomatic relations has been done with only four countries, that understands Bhutan?s cultural values, which are India, Bangladesh, Kuwait and Thailand, and other non-residential diplomatic relations. This is important because in terms of trade and development without any trade and assistance of other countries Bhutan can?t fulfill it?s needs, along side wanting a better quality and standards of life. But with raising the standard of living it is crucial for materials that helps so, to not hurt its cultural identity. Thus major powers of the world like the USA, Russia, Britain, France and China have normal relations and no diplomatic and residential relations along with it. With this and the acceptance for India?s guidance over development and economy, Bhutan?s development goals in terms of maximizing people?s happiness has been a success. It is taking globalization slowly taking account the effects to cultural identity, as for the good of it?s people. ...read more.