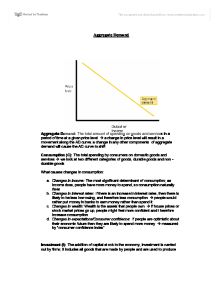 Aggregate Demand Aggregate Demand: The total amount of spending on goods and services in a period of time at a given price level --> a change in price level will result in a movement along the AD curve; a change in any other components of aggregate demand will cause the AD curve to shift Consumption (C): The total spending by consumers on domestic goods and services --> we look at two different categories of goods, durable goods and non-durable goods What causes changes in consumption: a. Changes in income: The most significant determinant of consumption; as income rises, people have more money to spend, so consumption naturally rises b. Changes in interest rates: If there is an increase in interest rates, then there is likely to be less borrowing, and therefore less consumption --> people would rather put money in banks to earn money rather than spend it c. Changes in wealth: Wealth is the assets that people own --> if house prices or stock market prices go up, people might feel more confident and therefore increase consumption d. ...read more.

Changes in National income: As national income rises, so does consumption; if income and consumption are rising, there will be pressure on the existing capacity of firms, causing them to invest in new capital to meet the increase in demand (induced investment) --> investment accelerates when national income rises c. Technological change: In order to keep up with advances in technology and remain competitive, firms will need to invest in technology d. Expectations/Business confidence: There would be little point in investing to increase the potential output of a firm if consumer demand is likely to fall in the future --> measured in "business confidence index" Government Spending (G): Governments spend money on a wide variety of goods and services at a variety of levels (federal, state, municipal) --> these include health care, education, law and order, transport, social security, housing, and defense; the amount of government spending depends on its policies and objectives What causes changes in government spending: If a government has made a commitment to financially support a given industry, then government spending will rise. ...read more.

Direct taxes (taxes on income) or indirect taxes (taxes on goods and services) can be raised or lowered to alter the amount of disposable income that consumers have. Governments use expansionary fiscal policy to increase aggregate demand and contractionary fiscal policy to reduce aggregate demand. - If a government would like to encourage greater consumption, then it can lower income taxes to increase income, increasing AD - If a government would like to encourage greater investment, then it can lower corporate taxes so that firms enjoy higher after-tax profits that can be used for investment Monetary Policy: The set of official policies governing the supply of money in the economy and the level of interest rates in an economy. Changes in the central bank's base rate can affect the level of AD in the economy. By reducing rates, it reduces the cost of borrowing and can lead to increases in both consumption and investment. This is known as "loose" monetary policy. ...read more.