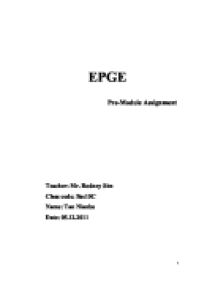 EPGE Pre-Module Assignment Teacher: Mr. Rodney Sim Class code: Bsc15C Name: Tan Nianbo Date: 05.12.2011 Question 1 According to the above forecast of GDP growth of Singapore, we know that it stand at 5.3% instead of 6.2% earlier. Therefore, it clearly indicates that the forecast of Singapore's GDP growth downgrade. Gross Domestic Product, it refers that during a period of time, the production of all final goods and labor value from the economy of a country or region, it is often recognized as the best index to measure national economic conditions. It not only reflects a country's economic performance, but also reflects a country's national strength and wealth. The importance of GDP can not be ignored, especially when it is mentioned in the same breath with market expectations, the actual economic growth rate or recession rate often affects the trend of financial markets. The higher the data shows that the more driving economic growth. GDP represents all the economic activity within the country, reflects the basic situation for economic growth, it is used to analyze current status of the state's economic development. ...read more.

"A strong dollar will stimulate GDP by discouraging exports and encouraging imports," says Bob McTeer, former president of the Federal Reserve Bank of Dallas. Monetary factors also affect GDP. The U.S is one of Singapore's major trading partners, the U.S. dollar exchange rate continued to decline, the relative value of Singapore dollar increase, but Singapore is a country need to reserve more foreign currency, which means it needs more exports, exporting more production needs to undervalue its own currency. Therefore, the decline in the dollar also affected Singapore's exports, led to GDP growth declined. Question 2 In my opinion, I agree with the statement without a doubt. The main aim of the government is to reduce high inflation to keep balance. Inflation, a monetary phenomenon, is an increase in money and credit. Its major consequence is raising prices. Inflation occurs when the economy's aggregate volume of money expenditures grows at a faster rate than its total real output grows. Inflation is thus an increase in the supply of money without a corresponding increase in the supply of goods and services. ...read more.

Fiscal policy: government should raise tax rate and reduce expenditure, for example, raising consumption tax, it makes goods more expensive, so you need to pay more consumption tax when you buy something, it will make you reduce the number of purchasing things. Thus, the total market demand will reduce at a certain level, making the overall price fall, playing an alleviative role to high inflation. Main weapon to fight against inflation after 1970 has been monetary policy, widely used by Conservatives. The main policies have included controlling interest rates and medium-term financial strategy. Also the real inflation is much caused by people's expatiation on future inflation, reducing the expectations of inflation in the future has been one of the governments' aims. The consequences of inflation are quite serious. It has bad effect on growth, because it increases uncertainty and discourages savings. It is also damaging for the balance of payment, because it makes imports cheaper. It distributes incomes in favour of profit earning, away from fixed earning pensioners, whose real income will fall. Therefore, government must play active role in managing high inflation rate by an economy all the time. ...read more.