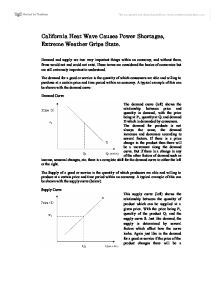 California Heat Wave Causes Power Shortages, Extreme Weather Grips State. Demand and supply are two very important things within an economy, and without them, firms would not and could not exist. These terms are considered the basics of economics but are still extremely important to understand. The demand for a good or service is the quantity of which consumers are able and willing to purchase at a certain price and time period within an economy. A typical example of this can be shown with the demand curve: Demand Curve The demand curve (left) shows the relationship between price and quantity in demand, with the price being at P1, quantity at Q1 and demand D which is demanded by consumers. The demand for products is not always the same, the demand increases and decreases according to several factors. ...read more.

Again just like in the demand for a good or service if the price of the product changes there will be a movement along the supply curve. But any other factors such as the costs of factors of production (costs of resources, labour, etc.), technology improvements (machinery upgrades), etc. will cause the supply curve to shift either to the left or right. In Los Angeles, California in March 2007 there was a very worrying heat wave sweeping this part of the country, which reached over 100 degrees Fahrenheit. This caused an extremely large increase in the demand for electricity because people were using cooling appliances which require so much electricity to function such as air-conditioners. Because of the increased demand, the supply was increased to the maximum possible but with demand topping supply capabilities this left few homes without an electricity supply. ...read more.

Again the price has remained the same because electricity is at a fixed price rate. This firm has increased output to meet the demand or power outages will be created. Due to the sudden changes in climate the power companies were unable to meet the increasing demand for electricity, even though it was operating at maximum capacity. This caused a shift to the right in the quantity demanded and the quantity supplied of the two curves. There were still people without electricity due to the fact that these air-conditioners were being used to cool homes and also public cooling stations, on top of everyday appliances which require electricity too. This caused an excess demand in the economy because the power company could not supply enough electricity to meet the demand at the time of the heat wave. ...read more.