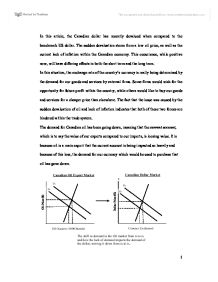 In this article, the Canadian dollar has recently devalued when compared to the benchmark US dollar. The sudden devaluation stems from a low oil price, as well as the current lack of inflation within the Canadian economy. This occurrence, while positive now, will have differing effects in both the short term and the long term. In this situation, the exchange rate of the country's currency is really being determined by the demand for our goods and services by external firms. Some firms would wish for the opportunity for future profit within the country, while others would like to buy our goods and services for a cheaper price than elsewhere. The fact that the issue was caused by the sudden devaluation of oil and lack of inflation indicates that both of these two forces are hindered within the trade system. ...read more.

In the short term, the decreased value of the Canadian dollar will gradually return to higher levels as lost oil exports are purchased by another country, as well as a gradual increase in the overall purchase of Canadian goods in the United States market, as the United States is seeing a relative increase in the purchasing power of their dollar. The increase in the value of the American dollar will also decrease the purchasing power of Canadian importers, and thus imports will also decrease on a short term basis. Thus the overall value of the current account will increase, as more income would be staying within the country, and it would become a larger part of the GDP. Comparatively, the capital account though will continue to decrease as the favorability of the Canadian market continues to slowly increase, as indicated by creeping inflation rates. ...read more.