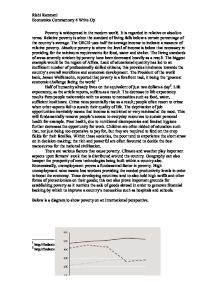 Discuss the various factors that cause poverty.

Poverty is widespread in the modern world. It is regarded in relative or absolute terms. Relative poverty is when the standard of living falls below a certain percentage of the country's average. The OECD uses half the average income to indicate a measure of relative poverty. Absolute poverty is where the level of income is below that necessary in providing for the minimum requirements for food, water and shelter. The living standards of areas severely stricken by poverty have been decreased heavily as a result. The biggest example would be the region of Africa. Lack of educational quantity has led to an inefficient number of professionally skilled citizens; this provides hindrance towards the country's overall workforce and economic development. The President of the world bank, James Wolfensohn, reported that poverty is a forefront task, it being the 'greatest economic challenge facing the world' 1 Half of humanity already lives on the equivalent of just two dollars a day2. ...read more.

There are various factors that cause poverty. Climate and weather play important aspects upon farmers' stock that is distributed around the country. Geography can also hamper the prosperity of new technologies being built within a country also. Economically, unemployment proves a fundamental factor in poverty. High unemployment rates means less workers providing the needed productivity levels in order to boost the economy. These developing countries tend to also hold high tariffs and other forms of protectionism on their goods; this can also prove important grounds for establishing poverty as it restricts the sale of goods abroad in order to generate financial backing by which to improve a country's necessities such as hospitals and schools. Below is a diagram to show poverty on an International perspective. As one can see, the South-Asian region experiences the largest wave of poverty. ...read more.

The inevitable factors putting a potential halt to poverty being increase in incomes and investment levels increased also, as well as increases in both labour productivity and education and health guarantees. There are other factors that enable the deeming of an area as poor. Aspects such as calories and protein per day are often the causes of malnutrition within a country; this of course develops from lack of basic foods. Literacy rates and numbers of hospital beds also contribute to the overall stability of a country. The article explains that there is no prospect of a remedy within the meagre life expectancy of poverty's billions of potential victims.3 However, direct aid and free trade can enable the generating of potential finances; by establishing more children into primary and secondary education, with the help of the correct government management to ensure these are efficient, the bigger the chance people have to obtain future jobs and career paths. 1 http://findarticles.com/p/articles/mi_m0JQP/is_2001_Nov/ai_80756718 2 http://findarticles.com/p/articles/mi_m0JQP/is_2001_Nov/ai_80756718 3 http://findarticles.com/p/articles/mi_m0JQP/is_2001_Nov/ai_80756718 ?? ?? ?? ?? Rishi Ramnani Economics Commentary 4 Write-Up ...read more.