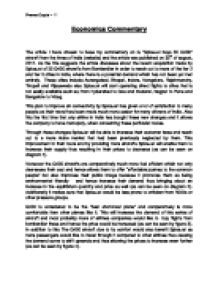 Economics commentary on SpiceJet buys 30 Q400 aircraft from the times of India (website) and the article was published on 30th of August, 2011.

Economics Commentary The article I have chosen to base my commentary on is "SpiceJet buys 30 Q400" aircraft from the times of India (website) and the article was published on 30th of august, 2011. As the title suggests the article discusses about the recent acquisition made by SpiceJet of 30 Q400 aircrafts from Bombardier in order to reach out to more of the tier 2 and tier 3 cities in India, where there is a potential demand which has not been yet met entirely. These cities include Aurangabad, Bhopal, Indore, Mangalore, Rajahmundry, Tirupati and Vijayawada also SpiceJet will start operating direct flights to cities that is not easily available such as; from Hyderabad to Goa and Madurai, Nagpur to Pune and Bangalore to Vizag. ...read more.

Through these changes SpiceJet will be able to increase their customer base and reach out to a more niche market that had been previously neglected by them. This improvement in their route and by providing more aircrafts SpiceJet will enable them to increase their supply thus resulting in their prices to decrease (as can be seen on diagram 1). Moreover the Q400 aircrafts are comparatively much more fuel efficient which not only decreases their cost and hence allows them to offer "affordable journey to the common people" but also improves their public image because it promotes them as being environmental friendly and hence increase their demand thus bringing about an increase in the equilibrium quantity and price as well (as can be seen on diagram 2). ...read more.

In addition to this The Q400 aircraft due to its comfort would also benefit SpiceJet as more passengers would like to travel through it compared to other airlines thus causing the demand curve to shift upwards and thus allowing the prices to increase even further (as can be seen by figure 4). The Q400 aircraft are not only going to benefit SpiceJet but also millions of people and India as a whole since this would cause a drastic improvement in communications. Also it will set a trend for other airlines to also offer more routes and hence force the prices to go even lower as the competition will increase and the demand would become comparatively elastic (as can be seen by diagram 5). ?? ?? ?? ?? Prerna Gupta - 11 ...read more.