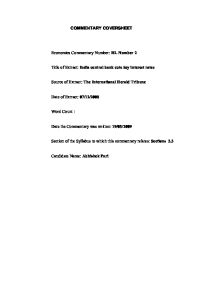 COMMENTARY COVERSHEET Economics Commentary Number: HL Number 2 Title of Extract: India central bank cuts key interest rates Source of Extract: The International Herald Tribune Date of Extract: 07/12/2008 Word Count : Date the Commentary was written: 19/05/2009 Section of the Syllabus to which this commentary relates: Sections 3.3 Candidate Name: Abhishek Puri The impact of the global financial crisis on India has been export centric. As a consequence of the crisis, steeply diminishing export growth has resulted in low business confidence and a decrease in industrial production naturally, has been observed. As a result, India's economic growth decreased from roughly 9.0% to 5.3%. One must establish that Fiscal Policy is the set of a government's policies relating to its spending and taxation rates. ...read more.

Changes in the central bank's interest rate can affect the level of Aggregate Demand in the economy. To increase aggregate demand, the central bank may lower the interest rate. This ultimately reduces the cost of borrowing and can lead to increases in both consumption and investment. This is known as expansionary or "loose" monetary policy. As a part of monetary policy, the Indian central bank cut the "benchmark repurchase rate" (the rate at which it makes short term loans to commercial banks) from 5.5% to 5%. The cut in interest rates for commercial banks will allow these banks increase their capital flow through loans or deposit this capital to meet reserve requirements while loaning out the capital which could not be loaned out earlier thus increasing the money supply in the market. ...read more.

Tax cuts have lead to an increase in consumption due to higher savings, thus contributing to the notion to shift AD to the right along with monetary policy. The increase in the injection of capital into the money supply by $ 4 billion might not be a grand amount for a large economy, but it nevertheless, adds to the Government Spending component [G] of the determinants of shifting Aggregate Demand, in this case, to the right. Therefore, the combination of the application of fiscal policy through tax cuts and government spending along with that of monetary policy on a larger magnitude should lead to Aggregate Demand shifting to the right while increasing price levels and revitalizing the Real Gross Domestic Product of India while also reducing the unemployment rate. ...read more.