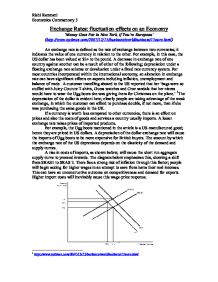 Exchange Rates: fluctuation effects on an Economy 'Money Goes Far in New York, if You're European' (http://www.nytimes.com/2007/12/15/business/worldbusiness/15euro.html) An exchange rate is defined as the rate of exchange between two currencies; it indicates the value of one currency in relation to the other. For example, in this case, the US dollar has been valued at $2+ to the pound. A decrease in exchange rate of one country against another can be a result of either of the following; depreciation under a floating exchange rate scheme or devaluation under a fixed rate currency system. For most countries incorporated within the international economy, an alteration in exchange rate can have significant effects on aspects including inflation, unemployment and balance of trade. ...read more.

For example, the Ugg boots mentioned in the article is a US-manufactured good; hence they are priced in US dollars. A depreciation of the dollar exchange rate will cause the imports of Ugg boots to be more expensive for British buyers. The amount by which the exchange rate of the US depreciates depends on the elasticity of the demand and supply curves. A rise in costs of imports, as shown below, will cause the short run aggregate supply curve to proceed inwards. The diagram below emphasizes this, showing a shift from SRAS1 to SRAS 2. There lies a strong risk of inflation through this factor; people will begin asking for higher wages in an attempt to save from harm their real incomes. ...read more.

The diagram above displays the effect of a depreciation of the US dollar on the balance of payments on current account. In the short term, the balance of payments worsens as the deficit grows. This is also referred to as the J-curve effect. After a while, however, the situation improves as the deficit decreases and moves towards surplus. In a longer time period, once consumers have adjusted to changes in import and export prices, the amount of US exports and imports will alter. The amount by which they change will determine the effect on the balance of payments on current account. The extent to which they change will depend upon the price elasticity of demand for US imports and exports. 1 http://www.nytimes.com/2007/12/15/business/worldbusiness/15euro.html 2 http://www.nytimes.com/2007/12/15/business/worldbusiness/15euro.html 3 http://www.nytimes.com/2007/12/15/business/worldbusiness/15euro.html ?? ?? ?? ?? Rishi Ramnani Economics Commentary 3 ...read more.