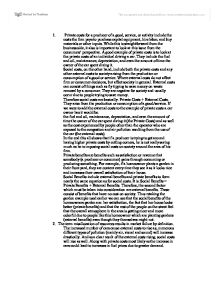 1. Private costs for a producer of a good, service, or activity include the costs the firm pays to purchase capital equipment, hire labor, and buy materials or other inputs. While this is straightforward from the business side, it also is important to look at this issue from the consumers' perspective. A good example of private costs is to look at the private costs of an individual driving a car. They include the fuel and oil, maintenance, depreciation, and even the amount of time the owner of the car spent diving it. Social costs, on the other hand, include both the private costs and any other external costs to society arising from the production or consumption of a good or service. Where external costs do not affect firm or consumer decisions, but affect society in general. External costs can consist of things such as fly tipping to save money on waste removal by a consumer. They are negative for society and usually occur due to people trying to save money. ...read more.

Social Benefits include external benefits and private benefits to form nearly the same equation as for social costs. It is: Social Benefits = Private Benefits + External Benefits. Therefore, the second factor which must be taken into consideration are external benefits. These consist of benefits that have no cost on society. Thus retaking the garden example used earlier we can see that the social benefits of the homeowners garden are: her satisfaction, the fact that her house looks better (private benefits) and that the rest of the people on the street feel that the overall atmosphere in the area is getting nicer and more colorful due to people like this homeowner which are planting gardens (external benefits) even though they themselves might not. 2. The term misallocation of resources results in market failure by definition. The increased number of cars cause external costs to rise as, numerous different types of pollution (mainly air, visual and sound) will increase drastically. And as a clear result of the external costs rising, social costs will rise as well. ...read more.

This would however cause social costs to increase. It would not only mean that the amount of cars circulating will decrease due to the risen costs of owning a car but the extra money the government collects can be put to use to improve transportation further by creating a larger more efficient form of public transport and try to reduce external costs in the most effective way. Another way governments could remedy the solution would be to impose laws on drivers and car manufacturers. For example, if catalytic converters were a legal necessity then all cars would pollute less reducing external costs. Another method of reducing pollution would be to impose that cars with license pate numbers ending in certain figures can only drive on certain days or to impose congestion charges throughout cities. This would also reduce external costs. If the government were to combine all these possibilities it would reduce congestion and pollution resulting in lower social and external costs, and increasing social benefits by implementing greater use of public transportation. This would mean that the market is working much closer to its point of equilibrium than before and thus is no longer failing. ...read more.