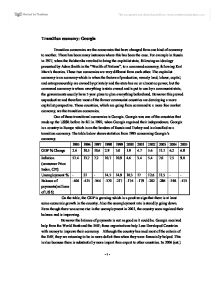 Transition economy: Georgia Transition economies are the economies that have changed from one kind of economy to another. There has been many instances where this has been the case. For example in Russia in 1917, when the Bolsheviks revolted to bring the capitalist state, following an ideology presented by Adam Smith in the "Wealth of Nations", to a command economy, following Karl Marx's theories. These two economies are very different from each other. The capitalist economy is an economy which is when the factors of production, namely land, labour, capital, and entrepreneurship are owned by privately and the state has no or almost no power, but the command economy is where everything is state owned and is put to use by a communist state, the governments usually have 5 year plans to plan everything beforehand. However this proved unproductive and therefore most of the former communist countries are developing a more capitalist perspective. ...read more.

Also the unemployment rate is steadily going down. Even though there was some rise in the unemployment in 2001, the country soon regained their balance and is improving. However the balance of payments is not as good as it could be. Georgia received help from the World Bank and the IMF; these organizations help Less Developed Countries with money to improve their economy. Although the country has med most of the criteria of the IMF, they are returning to be in more deficit than when they were financially helped. This is also because there is substantially more import than export to other countries. In 2006 (est.) the country was exporting 1.761billion US dollars and importing 3.32billion. This is not desirable for the country at all. For the country's economy to be stable the amount of export and import should be at equilibrium. Since this is not so, the country will not be growing at a rate that is needed. ...read more.

Georgia imports 2.4 billion kWh of energy, mostly from Russia. This is a great problem that the country must import energy because it is the major cause for the imbalance of import and export. The developing government must see to it that Georgia develops technology so that they do not need to rely on imports for energy in the future. In general, Georgia is improving. They have not improved as much as the other former USSR countries, but they are steadily making progress. After being helped by the World Bank and IMF, the country has become increasingly better off, although there are still more goals they need to achieve. The country has also applied to be in the European Union; however they were rejected because of the country's low standard of livings. The country has hope for the future. If they solve the major problems then they might have a chance of becoming a EU state, confirming their economic progress in the future. ?? ?? ?? ?? - 1 - ...read more.