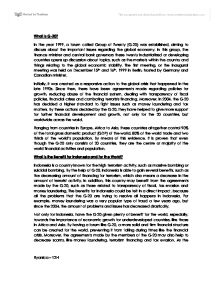 What is G-20? In the year 1999, a forum called Group of Twenty (G-20) was established, aiming to discuss about the important issues regarding the global economy.

What is G-20? In the year 1999, a forum called Group of Twenty (G-20) was established, aiming to discuss about the important issues regarding the global economy. In this group, the finance minister and central bank governors these twenty industrialized or developing countries opens up discussion about topics, such as the markets within the country and things relating to the global economic stability. The first meeting, or the inaugural meeting was held on December 15th and 16th, 1999 in Berlin, hosted by Germany and Canadian minister. Initially, it was created as a responsive action to the global crisis that happened in the late 1990s. Since then, there have been agreements made regarding policies for growth, reducing abuse of the financial system, dealing with transparency of fiscal policies, financial crises and combating terrorists financing. ...read more.

By means of this evidence, it is proven that even though the G-20 only consists of 20 countries, they are the centre or majority of the world financial activities and population. What is the Benefit for Indonesia and for the World? Indonesia is a country known for the high terrorism activity, such as massive bombing or suicidal bombing. By the help of G-20, Indonesia is able to gain several benefits, such as the decreasing amount of financing for terrorism, which also means a decrease in the amount of terrorist activity. In addition, this country may benefit from the agreements made by the G-20, such as those related to transparency of fiscal, tax evasion and money laundering. The benefits for Indonesia could be felt in a direct impact, because all the problems that the G-20 are trying to resolve all happens in Indonesia. ...read more.