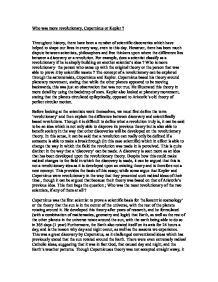 who was more revolutionary, Kepleror Copernicus

Who was more revolutionary, Copernicus or Kepler ? Throughout history, there have been a number of scientific discoveries which have helped to shape our lives in every way, even to this day. However, there has been much dispute between scientists, philosophers and free thinkers upon where the difference lies between a discovery or a revolution. For example, does a scientist classify as a revolutionary if he is simply building on another scientist's idea ? Who is more revolutionary- the person who came up with the original theory or the person that was able to prove it by scientific means ? The concept of a revolutionary can be explored through the astronomists, Copernicus and Kepler. Copernicus based his theory around planetary movement, stating that while the other planets appeared to be moving backwards, this was just an observation that was not true. He illustrated this theory in more detail by using the backdrop of stars. Kepler also looked at planetary movement, stating that the planets circulated epileptically, opposed to Aristotle's old theory of perfect circular motion. Before looking at the scientists work themselves, we must first define the term 'revolutionary' and then explain the difference between discovery and scientifically based revolutions. ...read more.

Because it wasn't widespreadly accepted, and took centuries before it was ever fully applied, some can argue that Copernicus was merely just another scientist with a hypothesis. Also, it can be argued that Coepernicus was not the first to have developed this theory of Heliocentricity. In ancient India, Yajnavalkya, an Indian theologist, believed the Earth was spherical and that the sun was the center of all the spheres. He based this theory around observations he made as well as influences from the 'Baghvad Ghita' , one of the ancient Sanskrit holy books of the Brahmin religion. Therefore it can be argued that Coepernicus' theory was not unique, and that this 'luck' should in no way define him as being a revolutionary. Similarly, there are disputes upon whether or not Kepler can be seen as a revolutionary. While some argue that his theory was a significant scientific development upon which most planetary discoveries have been established, he can again only be seen as a scientist, as he more or less based his discoveries around Copernicuses heliocentricity theory, and the studies of Tycho Brahe. Kepler examined planetary positions in the solar system under the assumption that they rotated in perfect circles, in correllation to Coepernicus' theory. ...read more.

Kepler showed that the planets did not operate as perfectly as everyone so had imagined, and that there were outside factors that would effect planetary rotations. This proved to be a stepping stone for further research for scientists, and has led to a great number of breakthroughs since. Therefore, Kepler's theory definitely can be seen as one of the most effective. Furthermore, Kepler's theory also gave basis to Newton in order to develop the law of Gravity- one of science's most important theories. In conclusion, I believe that Kepler was the most revolutionary in comparison to Copernicus. This may seem like an odd choice, but the justifications prove why Kepler's theory had more benefit that Coepernicus', therefore showing how Kepler's idea was more of a scientific breakthrough. As said earlier, it is difficult to decide upon whether or not a scientist merely made a discovery or a revolution as people will have different opinions on what defines such a term. It can then be said that to decide upon whether a scientist is a revolutionary or not is dependant on how the revolution has affected the individual (ie. Some will feel that Copernicus is more revolutionary than Kepler). Therefore , the concept of Kepler being the most revolutionary is merely opinionated , and there is no real way to decide which of the two can be deemed 'the most revolutionary'. ...read more.