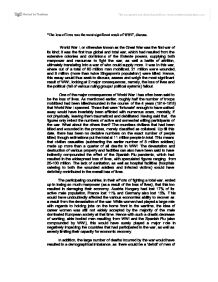 The loss of lives was the most significant result of WWI, discuss.

"The loss of lives was the most significant result of WWI", discuss. World War I, or otherwise known as the Great War was the first war of its kind; it was the first true global and total war, which had resulted from the extensive colonies and dominions of the Entente powers, supplying both manpower and resources to fight the war, as well a battle of attrition, ultimately translating into a war of who could supply more. It was in this war, where out of a total of 65 million men mobilized, 21 million were wounded, and 8 million (more than twice Singapore's population!) were killed. Hence, this essay would thus seek to discuss, assess and weigh the most significant result of WWI, looking at 2 major consequences, namely, the loss of lives and the political (fall of various ruling groups/ political systems) fallout. One of the major consequences of World War I has often been said to be the loss of lives. As mentioned earlier, roughly half the number of troops mobilized had been killed/wounded in the course of the 4 years (1914-1918) ...read more.

Hence with such a drastic decrease of working, able bodied men resulting from WWI and the Spanish Flu (also compounded by WWI), this would have surely played a major role in negatively impacting the countries that had participated in the war, as well as severly limiting their capacity for economic recovery. In addition, the large number of deaths incurred by the war would have resulted in a demographical imbalance, as there would be a 'deficit' of men of a certain age group. This would also contribute to a declining birth rate of a country resulting from an unbalanced ratio of men to women and hence be even postulated to be (together with World War II) one of the root causes of the problem of a shrinking population that Germany and France are facing today. Similarly, one could argue that the most significant result of WWI was the political changes that had occurred in Europe, as well as in the international community. Firstly, it was during World War I where several governments had been discredited/ actions made by governments eventually led to them being overthrown. ...read more.

The great war had also led to the collapse of the Austro-Hungarian empire, splitting it up into several smaller states, among which include Czechoslovakia and Poland. This led to the end of the last of the powerful feudal monarchies in Europe, leading to a change in the balance of power; what was once consolidated on the throne of the Austro-Hungarians was now spread out among the different smaller countries that were now formed. With the concentration of power no longer belonging to the Austo-Hungarians, and the British, French and Germans devastated, where then would this power lie? With the United States of America, whose soil was not affected by the war, yet the resurgence of their policy of isolationism meant that they weren't willing to take pole position as the world's leading superpower; resulting in a power vacuum at the top during the interwar period. This may have given the opportunity for Germany's rise/ the weak tactic of appeasement, leading to WWII. In conclusion, I feel that the most significant result of WWI was the political changes/ adjustments in the balance of power, as these were turning points in history, with the rise of communism, as well as the precipitation of WWII, forever changing the course of human history. ...read more.