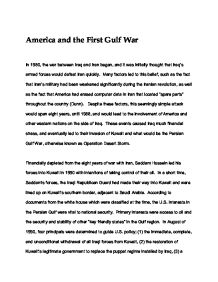 America and the First Gulf War

America and the First Gulf War In 1980, the war between Iraq and Iran began, and it was initially thought that Iraq's armed forces would defeat Iran quickly. Many factors led to this belief, such as the fact that Iran's military had been weakened significantly during the Iranian revolution, as well as the fact that America had erased computer data in Iran that located "spare parts" throughout the country (Dunn). Despite these factors, this seemingly simple attack would span eight years, until 1988, and would lead to the involvement of America and other western nations on the side of Iraq. These events caused Iraq much financial stress, and eventually led to their invasion of Kuwait and what would be the Persian Gulf War, otherwise known as Operation Desert Storm. Financially depleted from the eight years of war with Iran, Saddam Hussein led his forces into Kuwait in 1990 with intentions of taking control of their oil. In a short time, Saddam's forces, the Iraqi Republican Guard had made their way into Kuwait and were lined up on Kuwait's southern border, adjacent to Saudi Arabia. ...read more.

It demanded that Iraq withdraw forces immediately and Iraq and Kuwait begin peace negotiations. When ignored, a new resolution was created on November 29, 1990. Resolution 678 was adopted, giving Iraq a deadline of January 15, 1991 to comply with resolution 660. This new resolution authorized all member states to "use all necessary means to uphold and implement resolution 660." Although the deadline was set, and the U.N. had authorized full scale invasion and attack of Iraqi forces, the U.S. still needed Congress to approve war. Many American Citizens were concerned that Iraq forces, hardened by 8 years of war with Iraq, totaled over 500,000 troops and the war may not turn out to be as simple as perceived (Marshall Cavendish Corporation 1316). Protestors made statements and carried signs such as "No blood for Oil," and in the month of January, 1991, it is estimated that 500,000 Americans were involved in protests against the war (Ells). Despite the protests, the House and the Senate approved the war, and Operation Desert Storm was initiated. In response to the public reaction to the war, the media was restricted in the information it received, and the initial activities of the war were portrayed as bloodless, and the air attacks were referred to as "surgical strikes" (Snow). ...read more.

At 8:01 a.m. on February 28, 2001, a cease fire was declared, and the liberation of Kuwait had been successful. The Gulf War was now over. The U.S. interest in this war, as well as the Iran-Iraq War from 1980-1988, and the current war in Iraq, have all been based on control of Oil. As noted in National Security Directives from this time period, access to oil and the security and stability of other oil rich nations in the area are considered a threat to national security. In this respect, the U.S. has always taken military action when access to oil in the Middle East has been threatened. The role of America in this war was one of leadership. Bush sent troops into Saudi Arabia immediately after Saddam Hussein invaded Kuwait, and it was the U.S. who summoned over 30 other nations to send forces to build the coalition. Control of such a large proportion of the world's oil by a leader such as Saddam Hussein does seem like a threat, however, this interest has been an ongoing concern for many years, and America will continue to play a role in this issue for years to come. ...read more.