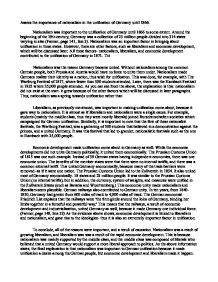 Assess the importance of nationalism in the unification of Germany until 1866.

joined Burschenschaften societies which campaigned for German unification. Similarly, it is important to note that the first of these nationalist festivals, the Wartburg Festival, was a gathering of 500 students that believed in a demonstration against the princes, and a united Germany. It was this festival that led to grander, nationalistic festivals such as the one in Hambach with 25,000 people. Economic development made unification come about in Germany as well. While the economic developments did not unite Germany politically, it united them economically. The Prussian Customs Union of 1815 was one such example. Instead of 39 German states having independent economies, there was one economic union. The benefits of the member states were that there were no internal tariffs, and there was a common external tariff. ...read more.