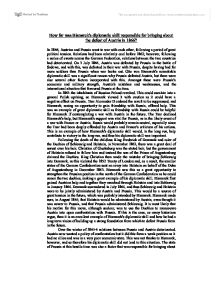 How far was Bismarck's diplomatic skill responsible for bringing about the defeat of Austria in 1866? In 1866, Austrian and Prussia went to war with each other, following a period of great political tension. Relations had been relatively cool before 1862; however, following a series of events across the German Federation, relations between the two countries had deteriorated. On 3 July 1866, Austria was defeated by Prussia in the battle of Sadowa, and with this, was defeated in their war with Prussia, despite having had far more soldiers than Prussia when war broke out. Otto von Bismarck's remarkable diplomatic skill was a significant reason why Prussia defeated Austria, but there were also several other factors incorporated with this. Amongst these were Prussia's economic and military strength, Austria's mistakes and weaknesses, and the international situation that favoured Prussia at the time. In 1863 the inhabitants of Russian Poland revolted. This could escalate into a general Polish uprising, so Bismarck viewed it with caution as it could have a negative effect on Prussia. Tsar Alexander II ordered the revolt to be suppressed, and Bismarck, seeing an opportunity to gain friendship with Russia, offered help. ...read more.

He made a secret alliance with Italy in April 1866, with which Italy agreed to follow Prussia if it declared was on Austria within 3 months. Bismarck, showing yet more diplomatic skill, then increased the tension with Austria over Holstein. In response to this the Austrians mobilised unilaterally in April and Prussia responded to this in May. By now tension was reaching very high levels and this was all down to Bismarck's diplomatic manoeuvring. The move by Austria made them seem like the aggressor to other countries and this did not help them to get aid from other countries in the future. Thus, because of his ability to create a fictitious relationship with Austria, Bismarck's diplomatic skill was a large factor in bringing about the defeat of Austria in 1866, as a tense atmosphere was more likely to spark off a war in conditions that already favoured Prussia. However, Bismarck was incredibly fortunate as he had an excellent fitting outfit in the Prussian army. The army improved greatly in fighting capacity in the early 1860s thanks to General Moltke and War Minister Roon, who ensured the army was increased, better trained and well armed. ...read more.

The international situation at the time favoured Prussia immensely, as it allowed Bismarck to carry out his actions to improve the Prussian position in the German Confederation without alerting the neighbouring European countries to a possible threat, as Prussia at this time was seen as a second-rate power. He was also helped by an excellent General in Moltke and the ability of War Minister Roon, who both contributed greatly to the Prussian military. Austria also made many mistakes in the Seven Weeks War, and this coupled with the weaknesses that had become all to prevalent in Austria since the 1848 revolutions, allowed Bismarck and his army to capitalise on the opportunity presented and defeat Austria in 1866. Also, whilst Austria had declined as an economic power, Prussia had grown as one. This allowed Bismarck to gain military resources with relative easy, which was one of the most important factors in bringing about the defeat of Austria. Therefore, Bismarck's diplomatic skill was a key factor in bringing about the defeat of Austria in 1866; however, there were several other key factors that played important roles in this Prussian victory, and so thus, Austria was defeated in 1866 as a result of a combination of factors, with Bismarck's diplomatic skill being one of the most important reasons for Prussian victory. ?? ?? ?? ?? ...read more.