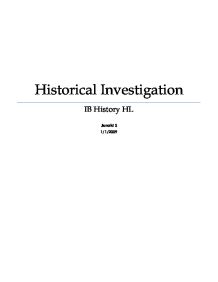 Historical Investigation IB History HL Junaid S 1/1/2009 A Plan of the investigation I. Subject of the investigation: The purpose of this investigation is to evaluate Great Britain's foreign policies in the Palestine Mandate and consequently her controversial role in the partition of Palestine on May 14th, 1948. II. Methods: Prior to evaluating Great Britain's role in the partition of Palestine in May, 1948, the investigation will approach the topic by first providing critical background information regarding the Jewish and the Arab claims concerning Palestine. For the purpose of highlighting the claims accurately, primary sources will be used including excerpts from Der Judenstaat (The Jews' State) by Theodor Herzl who is regarded as the founder of modern Zionism1. The main body of the investigation will introduce and elaborate upon the origin of the foreign policies adopted and implemented by Great Britain in her mandate of Palestine. Furthermore, using various sources from renowned historians, the successes and failures of these policies will be evaluated along with their impacts leading to partition. Conclusively, in all fairness, external factors such as international pressure on Great Britain for a partition due to international sympathy towards Jews after the Holocaust will also be analyzed with their role in partition of Palestine as well. B Summary of evidence * Using Theodor Herzl's The Jews' State to introduce the Jewish claim to Palestine one can see how the Zionists believed Jerusalem to be their homeland which they will obtain on all costs. ...read more.

This was followed in the following year with the growing interest shown by the British government in Zionist movements. 12The sympathy and interest felt by Great Britain for the Zionists was shown by the Balfour Declaration on 2nd November, 1917. The Declaration read that "[British] Government view[s] with favor the establishment in Palestine of a national home for the Jewish people, and will use their best endeavors to facilitate the achievement of this object, it being clearly understood that nothing shall be done which may prejudice the civil and religious rights of existing non-Jewish communities in Palestine, or the rights and political status enjoyed by Jews in any other country."13 The purpose of this negotiation was out of self-interest of Britain itself and not out of the apparent sympathy shown publically. The declaration was put together with the efforts of Prime Minister Arthur Balfour and the Zionist key player Chaim Weizmann where the latter was involved in synthesizing of acetone, imported from Germany, and essential for making explosives potentially for British war-efforts. Thus appeasing Weizmann and through him the Zionist movement, Great Britain hoped to aid their own purposes in war and gain the Jewish support for their armies as well. 14Just these years from 1915 to 1917 set up the stage for a major Arab-Jew conflict as now the Promised Land was not promised to one but two completely different and opposing groups whose rivalry dated back centuries. ...read more.