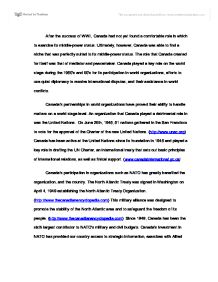 After the success of WWII, Canada had not yet found a comfortable role in which to exercise its middle-power status. Ultimately, however, Canada was able to find a niche that was perfectly suited to its middle-power status. The role that Canada created for itself was that of mediator and peacemaker. Canada played a key role on the world stage during the 1950's and 60's for its participation in world organizations, efforts to use quiet diplomacy to resolve international disputes, and their assistance in world conflicts. Canada's partnerships in world organizations have proved their ability to handle matters on a world stage level. An organization that Canada played a detrimental role in was the United Nations. On June 26th, 1945, 51 nations gathered in the San Francisco to vote for the approval of the Charter of the new United Nations. (http://www.unac.org) Canada has been active at the United Nations since its foundation in 1945 and played a key role in drafting the UN Charter, an international treaty that sets out basic principles of international relations, as well as finical support. ...read more.

(www.fas.org) The benefit for Canada is an effective defense of the continent without incurring extraordinary costs, and allows Canada to assert its sovereignty over Canadian territory. (www.norad.mil) NORAD reflects the essence of the unique defense relationship between Canada and the US. Canada's participation in peace keeping activities proved Canada's key role on the world stage. The most significant of Canada's early peacekeeping missions occurred in 1956, when a dispute over the Suez Canal threatened the stability of the Middle East. October 1956, a joint English-French-Israeli military force attempted to regain control of the Suez Canal. (www.thecanadianencyclopedia.com) The Canadian secretary of state for external affairs, Lester Pearson, was, however, able to negotiate a diplomatic solution. One of the key elements of the settlement was an innovative method to help establish peace in the region: the United Nations Emergency Force (UNEF). (www.thecanadianencyclopedia.com) With the arrival of the UNEF, the fighting between the combatants halted and a ceasefire was achieved. For his part in resolving the Suez Crisis, Pearson was awarded the Nobel Peace Prize. ...read more.

(http://www.militaryhistory.suite101.com )The Canadian Air Force aided in airlifting goods for the people who were blockaded in Berlin. On 15 April 1949, the Russian reported a willingness by the Soviets to lift the blockade due to the continued success of the constant allied airlifts. (http://www.militaryhistory.suite101.com) A large conflict Canada took part in was the Korean War. The Communist North Koreans, who were supported by communist Russian and China, campaigned to unify the country by force. (http://www.vac-acc.gc.ca) Members of the UN were then told to aid the South by any means possible. More than 26,000 Canadians served in the Korean War, which was a huge contribution in proportion to its population. (http://www.vac-acc.gc.ca) The Royal Canadian Navy was the first branch of Canada's forces to provide aid to the UN Forces in Korea. (http://www.vac-acc.gc.ca) Canada's participation in world organizations, peacekeeping, and aiding in global conflicts has proven their middle power status on the world stage. Canada assisted in resolving many international issues such as the Suez Crisis and the Soviet Blockade through peaceful means. Canada's quick and wise decisions prevented many deaths and may have even prevented a future nuclear attack from the east. ...read more.