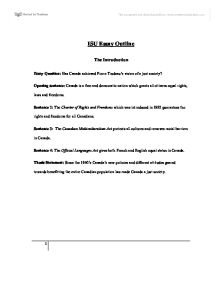 Canada's journey towards a just society

ISU Essay Outline The Introduction Essay Question: Has Canada achieved Pierre Trudeau's vision of a just society? Opening sentence: Canada is a free and democratic nation which grants all citizens equal rights, laws and freedoms. Sentence 2: The Charter of Rights and Freedoms which was introduced in 1982 guarantees the rights and freedoms for all Canadians. Sentence 3: The Canadian Multiculturalism Act protects all cultures and removes racial barriers in Canada. Sentence 4: The Official Languages Act gives both French and English equal status in Canada. Thesis Statement: Since the 1960's Canada's new policies and different attitudes geared towards benefitting the entire Canadian population has made Canada a just society. Argument ONE Argument One: The Charter protects all Canadians and grants them fundamental rights without being discriminatory. Proof One: The most important concept in the Charter is equality which lies at the very heart of a just society. Trudeau believed, "In my thinking, the value with the highest priority in the pursuit of a Just society has become equality." ...read more.

The Charter upholds the values of a just society by protecting the freedom of all Canadians and promoting equality. Argument Two Argument Two: Trudeau's government introduced the Canadian Multiculturalism Act which promotes equality and respects all cultures. Proof One: All Canadians regardless of race or religion have an equal opportunity to participate in society. The Multiculturalism Act states "Canadians of all origins have an equal opportunity to obtain employment and advancement."(1) For example, minority groups and immigrants can participate in the Canadian government. (2) Footnote: Bill C-24, Canadian Multiculturalism Act, 1985. (1) Who represents you in Parliament? , http://www.cbc.ca/canada/story/2009/05/08/f-canada-parliament-demographic.html (May 15, 2009) (2) Analysis: Canada has gone a long way in making the cultural mosaic by removing racial barriers in employment. Immigrants and other minority groups can feel they are welcome in this country and are encouraged to participate. Proof Two: The Canadian government respects all cultures and allows all Canadians to preserve their heritage. ...read more.

Proof Three: English and French are taught in schools across Canada so these languages are being preserved. An increasing number of students are enrolling in more than one language course-primarily English and French. Footnote: Canadian Charter of Rights and Freedoms Analysis: A large number of Canadians including students are bilingual and this promotes unity in the across the nation. Since English and French are both Canada's official languages Francophones and Anglophones are treated equally. Conclusion Re-stated Thesis: By giving all Canadians equal rights, responsibilities and freedoms, Canada has achieved Pierre Trudeau's vision of a just society. Sentence 2: The Charter protects every citizen under the law by granting fundamental freedoms, democratic rights, and equality rights. Sentence 3: The Canadian Multiculturalism Act has formed a united Canada where all cultures are respected and protected. Sentence 4: Since its introduction, The Official Languages Act has improved English-French relations by giving both languages equal status. Universal Statement: Since the 1960's Canada's new policies have created a nation without racial, language and ethical barriers, or in other words, a just society. ?? ?? ?? ?? 1 ...read more.