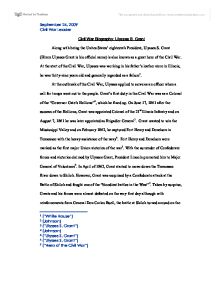 Civil War Biography: Ulysses S. Grant Along with being the Unites States' eighteenth President, Ulysses S. Grant (Hiram Ulysses Grant is his official name) is also known as a great hero of the Civil War. At the start of the Civil War, Ulysses was working in his father's leather store in Illinois; he was thirty-nine years old and generally regarded as a failure1. At the outbreak of the Civil War, Ulysses applied to serve as an officer when a call for troops went out to the people. Grant's first duty in the Civil War was as a Colonel of the "Governor Gate's Hellions"2, which he fixed up. On June 17, 1861 after the success of the Hellions, Grant was appointed Colonel of the 21st Illinois Infantry and on August 7, 1861 he was later appointed as Brigadier General3. Grant wanted to win the Mississippi Valley and on February 1862, he captured Fort Henry and Donelson in Tennessee with the heavy assistance of the navy4. ...read more.

With president Lincoln's support, Grant was determined to move ahead to victory. On October 25, 1862, Grant was back to a command post, with his appointment to the Army of Tennessee10. Ulysses was the ordered to take Vicksburg, Mississippi, so in the spring of 1863, Grant executed an effective campaign and crossed the Mississippi, south of Vicksburg11. Ulysses Grant then defeated the forces of Pemberton, which lead to the surrender of twenty thousand troops12. After a "fierce 42 day siege", Vicksburg fell on July 4th 186313. Winning Vicksburg, "the key city of Mississippi, [Grant had] thus cut the Confederacy in two"14. Grant's success in the West boosted his confidence. On October 22, 1863, Grant took command at Chattanooga, Tennessee, broke the Confederates' hold on Chattanooga, and managed to win the Battle of Chattanooga, forcing the Confederates to retreat into West Tennessee15. With the success of Vicksburg and Chattanooga, Grant had established his reputation as Lincoln's most aggressive and successful general. ...read more.

Lee surrendered to Grant at Appomattox Court House20. In his memoirs, Grant said that "he felt no exultation on the surrender, rather he felt sad and depressed for the foe that had suffered so much for a cause"21. Grant helped wrote terms of surrender that helped to begin the unity of the nations once again22. A main part of Grants terms were for the prevention of future trials of treason23. After the war, in 1866, Grant was given the grade of Full General, a rank held only by George Washington previously24. Grant later served as the Secretary of War under Andrew Johnson from August 12th, 1867 to January 14th, 186825. Grant's attempt to "protect the southern occupational army soon earned him a presidential candidacy in the radical Republican Party"26. In 1868 Grant won the election and served for two terms and was reelected in 1872, the first President to serve two full terms since Andrew Jackson, forty years before27. At 8:06 a.m. on July 23, 1885, Grant died at the age of sixty-three28. Basically, Grant was AWSOME. ...read more.