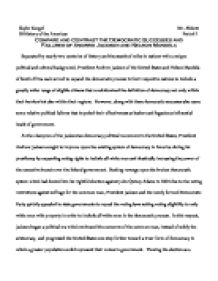 Skyler Korgel Mr. Abbott IB History of the Americas Period 1 Compare and Contrast the Democratic Successes and Failures of Andrew Jackson and Nelson Mandela Separated by nearly two centuries of history and thousands of miles in nations with a unique political and cultural background, President Andrew Jackson of the United States and Nelson Mandela of South Africa each served to expand the democratic process in their respective nations to include a greatly wider range of eligible citizens that revolutionized the definition of democracy not only within their borders but also within their regions. However, along with these democratic successes also came some relative political failures that impeded their effectiveness as leaders and legacies as influential heads of government. As the champion of the Jacksonian democracy political movement in the United States, President Andrew Jackson sought to improve upon the existing system of democracy in America during his presidency by expanding voting rights to include all white men and drastically increasing the power of the executive branch over the federal government. Seeking revenge upon the broken democratic system which had denied him his rightful election against John Quincy Adams in 1824 due to the voting restrictions against suffrage for the common ...read more.

A major issue during Jackson's presidency was his refusal to sanction the renewal of the Bank of the United States. Jackson spent much of his two terms downsizing the federal government. Jackson thought Congress did not have the authority to create the Bank in the first place and viewed the Bank as operating for the primary benefit of the upper classes at the expense of working people. He saw to it that the Second Bank of the United States failed by vetoing Congress's attempt to renew the Bank weakening the economic strength of the United States considerably. Due to the practice of banks issuing paper banknotes that were not backed by gold or silver reserves, there was soon rapid inflation and mounting state debts. Not only was Jackson an awful diplomat, he had no sentimental feelings among minorities, especially the Native Americans. In 1830, Congress passed the Indian Removal Act, a policy that Jackson enacted during office. The act offered the Indians land west of the Mississippi in return for evacuation of their tribal homes in the east. About 100 million acres of traditional Indian lands were cleared under this law. ...read more.

Looking back on the more recent presidency of Nelson Mandela, modern historians have noted only a few of his failures that his presidential legacy has left with South Africa, however none of which relatable to those of Andrew Jackson due to the extremely unique issues Mandela addressed during his time in office. Although the Mandela administration spent a large portion of their money and time in integrating the black masses into the equal society, little progress was actually made in bringing economic equality to the nation as millions of black inhabitants remained in impoverished ghettos and lacked the money to seek a better life while a majority of the wealth continued to circulate among the richer white population. Busy trying to reestablish a new, equal South Africa for all citizens, the Mandela administration has been criticized for its ineffectiveness in addressing and stemming the AIDS crisis in South Africa due to Mandela's preoccupation with other national issues. Despite these failures, the South African people still feel enormously indebted and infatuated with Mandela that his legacy left with the citizens seems to have been the cause of more indirect failures as the people see him as the epitome of South African democracy and change that they focus on electing politicians which emulate his character rather than on their political philosophy. ...read more.