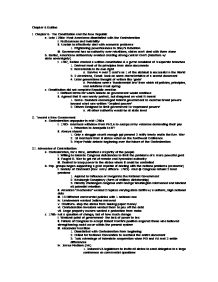 Chapter 6 Outline I. Chapter 6- The Constitution and the New Republic a. Late 1780s- Most Americans dissatisfied with the Confederation i. Factiousness and instability ii. Unable to affectively deal with economic problems 1. Frightening powerlessness in Shay's Rebellion iii. Government has no authority over rebellions, states can't deal with them alone b. Earlier, Americans deliberately avoided creating strong central Gvn't (interfere w/ state sovereignty) i. 1787, Nation created a written constitution & a gvrnt consisted of 3 separate branches 1. Derived most of its principles from state documents 2. Remarkable in its own right a. Survive 4 over 2 cent's as 1 of the stablest & successful n the World 3. 2 Americans, Const. took on some characteristics of a sacred document 4. Later generations thought of writers like 'gods' a. Provisions were a 'fundamental law' from which all policies, principles, and solutions must spring c. Constitution did not complete Republic creation i. Defined terms for which debate on government would continue ii. Agreed that it was nearly perfect, but disagreed on what it meant 1. Some- founders encouraged federal government to exercise broad powers beyond what was written "Implied powers" 2. Others-Designed to limit government to 'expressed powers' a. All other authority would be at state level II. Toward a New Government a. Confederation unpopular in mid-1780s i. 1783- members withdrew from PHILA to escape army veterans demanding their pay 1. Princeton to Annapolis to NY ii. Always absent 1. Only a struggle caus'd enough ppl present 2 ratify treaty endin the Rev. War 2. 18 members from 8 states voted on the Northwest Ordinance 3. Major Public debate beginning over the future of the Confederation III. Advocates of Centralization a. Confederation, for a time, satisfied a majority of the people i. Willing to tolerate Congress deficiencies to limit the problems of a more powerful gvnt ii. Fought R. War to get rid of remote and tyrannical authority iii. ...read more.

Not aspire to be highly commercial or urban, but rural and agrarian c. Centralize- "Federalists"- Hamilton d. Non-centralize- "Republicans"- Madison and Jefferson XI. Hamilton and the federalists a. Control of government from beginning lay in the hands of the Federalists (12 Yrs.) i. George Washington 1. Dreamed of strong central government- did little to alter with that dreams 2. Passive role in Federalist program a. President not directly involved in political controversies b. Avoided personal involvement in debate and few efforts to mediate ii. Dominant figure in administration- Alexander Hamilton 1. Exerted more influence in office and out 2. Most aristocratic in personal tastes and philosophy of politics a. Irony- humble childhood 3. Believed that stable government required elite ruling class 4. Authority in hands of 'enlightened few' 5. Adapt British system of king and aristocracy to USA 6. Government strengthened by support of wealthy a. Public debt fund'd by callin in certificates of indebtedness & replacin them w/ interest-bearing uniform bonds, payable @ certain dates b. Debt of states to be assumed by the Central Government c. DID NOT envision paying odd and eliminating the debt d. Permanent national debt- new bonds issued, old ones paid off e. Creditors have permanent stake in seeing government survive. 7. National Bank a. Loans and currency to businesses b. Give government safe place for deposit of funds c. Collection of taxes and distribution of government expenses d. Keep up the price of bonds e. Chartered by Federal Gvnt with a monopoly of banking business f. Controlled by directors 1/5 appointed by Government 8. Funding and assumption of debts, With interest= much $$$ 9. Adequate sources of revenue a. Taxes i. Excise to be paid by distillers of alcohol 1. PENN, NA, NC 2. Small frmrs who cnvrt'd corn&rye crops n2 whisky ii. Tariff on imports 1. Raise Revenue 2. Inspire Amrcn inspire by raisin foreign prices 3. ...read more.

Embarrassing to both Congress and Public 4. 1800- seemed Nation was dissolving into chaos XXI. The Revolution of 1800 a. Same candidates for 1800 election as 1796 b. Campaign ugliest in history i. Adams and Jefferson displayed reasonable dignity ii. Supporters showed no restraint 1. Jefferson's romantic involvement with black slave iii. Each side argued that opponents threatened existence of the Republic 1. F- accused Jefferson of being radical and bringing a reign of terror compared to the worst parts of the French Revolution 2. R- accused Adams of tyrant conspiring to become king and subverting human liberty and imposing slavery c. Election was close (crucial contest in NY) i. Aaron Burr got the Tammany Society to serve as the Republican political machine 1. Republicans carried the city and State 2. Jefferson was elected (apparently) d. Complication jeopardized republican victory i. Constitution called for each elector to vote for 2 people (P and VP) ii. Votes counted, and Jefferson and Burr each had 73 iii. Run-off with each delegation casting a single vote iv. Federalists majority, & had privilege of decidin which opponent wud b next president 1. Some hoped to salvage election for Feds. 2. Others wanted to strike deal with Burr and elect him 3. Feb 1801, no majority was reached 4. Week b4 induction, Feds decided Burr was 2 unreliable 2 trust w/ Presidency 5. Jefferson elected on 36th Ballot e. Election 1800- Repblicans captured presidency & majority of seats in both houses of Congress i. Only branch to Feds- Judiciary, and Adams took steps to secure hold on courts ii. Judiciary Act of 1801, reduced justices by one but increased judgeships 1. Circuit courts of appeal, standing between federal district court and S. Court 2. 10 new district judgeships 3. Adams quickly appointed Feds. To new positions (appointment for life) f. Despite F Efforts, R viewed their victory as nearly complete i. Nation had been saved from tyranny ii. New era where true principles would govern the land iii. Exuberance toward future iv. "Revolution of 1800" v. Remained to be seen how revolutionary it would be ...read more.