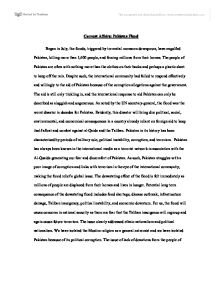 Current Affairs: Pakistan Flood Began in July, the floods, triggered by torrential monsoon downpours, have engulfed Pakistan, killing more than 1,600 people, and forcing millions from their homes. The people of Pakistan are often with nothing more than the clothes on their backs and perhaps a plastic sheet to keep off the rain. Despite such, the international community had failed to respond effectively and willingly to the aid of Pakistan because of the corruption allegations against the government. The aid is still only trickling in, and the international response to aid Pakistan can only be described as sluggish and ungenerous. As noted by the UN secretary-general, the flood was the worst disaster in decades for Pakistan. Evidently, this disaster will bring dire political, social, environmental, and economical consequences in a country already reliant on foreign aid to keep itself afloat and combat against al-Qaida and the Taliban. Pakistan in its history has been characterised by periods of military rule, political instability, corruption, and terrorism. Pakistan has always been known in the international media as a terrorist network in association with the Al-Quaida generating our fear and discomfort of Pakistan. As such, Pakistan struggles with a poor image of corruption and links with terrorism in the eye of the international community, making the flood relief a global issue. ...read more.

Pakistan's economy is also at risk, as the floods have destroyed millions of hectares of crops and could lead to soaring inflation and job losses. With everything they previously owned gone, people are now faced with debt as people are scrambling to rebuild their home. "Courage and hope is the only thing we have left," said Ali, a victim of the flood. This signified the importance of the Canadians to once again open its generosity to help victims in Pakistan and put Pakistan's image of corruption and terrorism behind. In such a time when human lives are at stake, when people are suffering and struggling for survival, Canadians should continuously follow its long held value of compassion and understanding of the victims of natural disaster, and not hesitate in donating to the people of Pakistan. Secondly, the preconceived image that Westerners have of Pakistan as a country should not alter our humanitarian principles nor diminish our compassion for victims of disasters. Millions of people who are suffering are civilians who are innocent of the terrorism within Pakistan. We should continuously hold our collective Canadian value of prosperity and tolerance to break through the usual political barriers and resentments to help Pakistanis in need. ...read more.

In conclusion, the people of Canada should continuously demonstrate its legendary generosity to expedite the recovery of flood-ravaged Pakistan despite its corrupt reputation. With over millions of people struggling to survive, Pakistan needs the attention and the compassion of Canada and the World more than ever to cope with hunger, disease, and overall the economic, social, and political damage caused by the worst disaster in decades. As a humanitarian objective, we should ignore and abolish biased political and religious views to show the people of Pakistan our universally extended sympathy, benevolence, and kindness to all human beings. As well, any help by international community will only strengthen their faith in the basic goodness of humanity and would help protect them from the evil influence of the extremists. In looking beyond her differences to help the victim in Pakistan, Jolie told reporters "I am very moved by them and I hope that I am able to, today and tomorrow.... Do something to help bring attention to the situation for all of the people in need in Pakistan." The issue of putting differences before humanitarian principles will continue to be an issue over time, and Pakistan will serve as a reminder to the rest of the world for their lack of donations. ...read more.