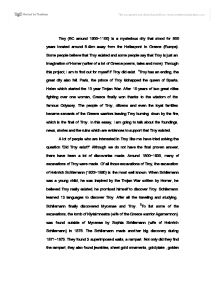 Troy (BC around 1900~1100) is a mysterious city that stood for 800 years located around 6.4km away from the Hellespont in Greece (Europe). Some people believe that Troy existed and some people say that Troy is just an imagination of Homer (writer of a lot of Greece poems, tales and more). Through this project, I am to find out for myself if Troy did exist. 4Troy has an ending, the great city also fell. Paris, the prince of Troy kidnapped the queen of Sparta, Helen which started the 10 year Trojan War. After 10 years of two great cities fighting over one woman, Greece finally won thanks to the wisdom of the famous Odyssey. The people of Troy, citizens and even the loyal families became servants of the Greece warriors leaving Troy burning down by the fire, which is the final of Troy. ...read more.

After all the traveling and studying, Schliemann finally discovered Mycenae and Troy. 2To list some of the excavations, the tomb of Klytaimnestra (wife of the Greece warrior Agamemnon) was found outside of Mycenae by Sophia Schliemann (wife of Heinrich Schliemann) in 1876. The Schliemann made another big discovery during 1871~1873. They found 3 superimposed walls, a rampart. Not only did they find the rampart, they also found jewelries, sheet gold ornaments, gold plate, golden swords and more high valued things. Unfortunately, the tomb of Klytaimnestra was already robbed when it was discovered. These are some evidences of Troy that Schliemann found. A lot of schools, professors and universities also tried searching for Troy. 5Professor Manfred Korfmann excavated Troy. He found the size of Troy, how the Trojan War would have been and what a great city Troy was. ...read more.

Although these people explored and studied rather than discovering, these can help people who are not experts in Troy to understand and connect the knowledge we have for Troy with the news and the findings of Troy more easily. I really want to know the answer and the truth of Troy. With the evidences that I collected and known to the world, I say Troy did exist. Although I cannot be perfectly sure, I say there are more possibilities that Troy is real than Troy being an imagination. I mean, ask, what are those discoveries and evidences, if it is not from Troy when it was found in the same place as Troy was recorded to be? Plus, so many of the evidences answer the questions correctly, such as the location, time line, stories, legends and myths with proofs. Although I am not sure if the Trojan War existed, I believe that Troy did exist. ...read more.