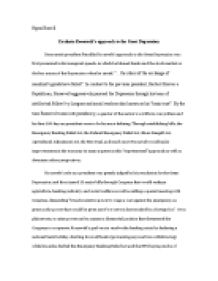 ﻿Ngozi Burrell Evaluate Roosevelt?s approach to the Great Depression Democratic president Franklin Roosevelt?s approach to the Great Depression was first presented in his inaugural speech, in which he blamed banks and the stock market as the key causes of the Depression when he stated, ??the rulers of the exchange of mankind?s goods have failed?. In contrast to the previous president, Herbert Hoover a Republican, Roosevelt aggressively pursued the Depression through his team of intellectual fellow Ivy Leagues and social workers also known as his ?brain trust?. By the time Roosevelt came into presidency, a quarter of the nation's workforce was jobless and his first 100 days as president were to be his most defining. Through establishing bills, the Emergency Banking Relief Act, the Federal Emergency Relief Act, Glass-Steagall Act, Agricultural Adjustment Act, the New Deal, and much more Roosevelt would make improvements in the economy in many aspects in this ?experimental? approach as well as devastate other perspectives. Roosevelt?s role as a president was greatly judged by his resolution for the Great Depression, and thus issued 15 major bills through Congress that would reshape agriculture, banking, industry, and social welfare as well as calling a special ...read more.

The "associationalists" wanted to encourage cooperation between business, labor, and government by establishing associations and codes supported by the three parties. The "economic planners," led by Rexford Tugwell, Adolph Berle, and Gardiner Means, wanted to create a system of centralized national planning. In the approach to the mostly affected groups of the Depression, farmers, Roosevelt experimented with numerous different approaches to ease the discomfort of one fifth of American families. As farm incomes fell, farm tenancy soared; two-fifths of all farmers worked on land that they did not own. The New Deal approached the farm problems through rural electrification programs, meaning that for the first time Americans in certain areas would have benefits of electricity and running water. Congress then passed a bill creating the Tennessee Valley Authority (TVA). The TVA was purposed to build 21 dams to generate electricity for thousands of farm families. Roosevelt also signed an executive order for the Rural Electrification Administration (REA), generating power for 35% of American farm families. However, more bills emerged like the Soil Conservation Service, the Farm Credit Administration, Commodity Credit, and Roosevelt's most ambitious farm program, the Agriculture Adjustment Act (AAA). ...read more.

It excluded women, forced inflexible measures on blacks, and offered employment to only a small number of the young people who needed work. Congress also established the National Recovery Administration (NRA) to help recover industry and labor by methods of rational planning. The idea was that representatives of business, labor, and government would establish codes that would set prices, production levels, minimum wages, and maximum hours within each industry. The NRA also supported workers' right to join labor unions. The success was short-lived, due to an ardent leader who alienated many businesspeople along with interference of private sectors, and the drafting of codes that favored larger businesses that led to resentment and those who quipped that the NRA stood for ?National Run-Around?. Roosevelt?s approval of big businesses was due to their knowledge in handling money as well as their experience in handling the economy. This observation thus concludes that his approach to the handling of the Great Depression was a contradiction in his inaugural speech; relying on the revival of banks and sustainability of the large businesses to resuscitate the economy, despite blaming the same two groups for placing America in that position of near destitution. ...read more.