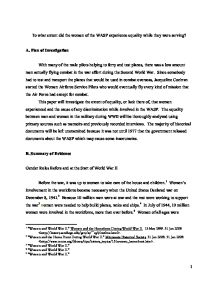 Gender Equality in the Military

To what extent did the women of the WASP experience equality while they were serving? A. Plan of Investigation With many of the male pilots helping to ferry and test planes, there was a low amount men actually flying combat in the war effort during the Second World War. Since somebody had to test and transport the planes that would be used in combat overseas, Jacqueline Cochran started the Women Airforce Service Pilots who would eventually fly every kind of mission that the Air Force had except for combat. This paper will investigate the extent of equality, or lack there of, that women experienced and the cause of any discrimination while involved in the WASP. The equality between men and women in the military during WWII will be thoroughly analyzed using primary sources such as memoirs and previously recorded interviews. The majority of historical documents will be left unexamined because it was not until 1977 that the government released documents about the WASP which may cause some inaccuracies. B. Summary of Evidence Gender Roles Before and at the Start of World War II Before the war, it was up to women to take care of the house and children.1 Women's involvement in the workforce became necessary when the United States Declared war on December 8, 1941.2 Because 10 million men were at war and the rest were working to support the war3 women were needed to help build planes, tanks and ships.4 In July of 1944, 19 million women were involved in the ...read more.

World War II caused a shift in what was socially acceptable of women's roles. Even though women were needed to work, they had never received the training that males had. This caused men to believe that once the war was over, they would be able to go back to the lifestyles that they held before the war started. Women's role of filling in for men while they were at war allowed for a women to feel as though they were just as valuable as men were. Although women were found useful in the workforce it was believed that they were not needed in the military. The rejection of having women in the military was one of the first forms of discrimination that the WASP faced. When Jackie Cochran and Nancy Harkness Love started the WASP, they were expressing their newly found independence. This independence was caused by the roles that females were fulfilling in the workforce. Although the Women Airforce Service would be working side by side with men in the military and fulfilling military jobs, the women were not granted military status. By having to pay their own way to the training camps, it reminded the women that, even though women would be allowed to fly missions for the military, they were still considered unequal to men and not a part of the military. The criteria for entrance into the training program for the WASP demonstrated how females were considered weaker than men and more at risk for injury. ...read more.