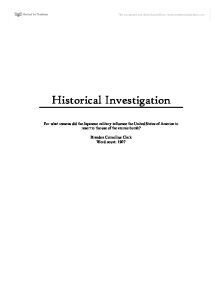 Historical Investigation For what reasons did the Japanese military influence the United States of America to resort to the use of the atomic bomb? Brandon Cornellius Clark Word count: 1907 Historical Investigation A. Plan of Investigation Question For what reasons did the United States resort to the use of nuclear weapons on Hiroshima and Nagasaki instead of an invasion of Japan? Method of Investigation The original battle strategy of ending the war in the Pacific during World War II was a joint operation invasion of Japan, lead by the United States. In previous engagements, the United States Marine Corps fought for each Japanese occupied island to gain control in the Pacific. In each battle, the Marines would fight against devoted Japanese soldiers who were willing to defend their positions until death, creating an immense challenge for the Marines. With the capture of Iwo Jima and Okinawa, the United States military forces would have the first stepping stones for the invasion of mainland Japan. But the United States would soon they miscalculated one thing: the determinism of the Japanese defenders. At the battle of Iwo Jima, almost all the Japanese defenders were killed in the battle, only leaving 100 of Japanese defenders alive. The battle for Okinawa eventually cost 49,000 American lives, and 110,000 Japanese casualties. To slow the advance of the Americans, the Japanese high command planned to emphasize kamikaze, suicide-piloted aircraft attacks on Allied ships. These accounts of the battle will show the evidence of the Japanese ferocity that will eventually influence the decision of the use of nuclear weapons on Japan. ...read more.

Above all, he demonstrates the Japanese militarists' continuing belief that they could defeat the U.S. Japan had almost 13,000 planes available for suicide attacks, and plans for the defense of Kyushu, the U.S.'s initial invasion site, were elaborate and sophisticated, deploying over 900,000 men. Faced with this conundrum, in Giangreco's excellent examination, President Truman took what seemed the least appalling option. C. Evaluation of Sources Source 1: Hell to Pay: Operation Downfall and the Invasion of Japan, 1945-1947. This book was written from a third-party perspective by World War II historian, D.M. Giangreco. The purpose of this work is to inform the reader of the research of the analysis of America's motives for using atomic bombs against Japan in 1945. The value of this source is that it is written from a series of documents collected by various military commanders in the Pacific. Based on the information provided by Giangreco, the reader is able to connect the reasons why President Truman employed the atomic bombs on Hiroshima and Nagasaki. One of the limitations of this work is the works the author used his own interpretation from the facts he presents, it allows for the reader insight into a particular interpretation of the facts. Source 2: War Plan Orange: The U.S. Strategy to Defeat This book was written from a third-party perspective based on collected documents on pre and post-World War II economies of the United States and its allies and the Empire of Japan. ...read more.

against the huge American invasion fleet off the Philippines, and then realized that he had less than 100 operational aircraft for this task (Inoguchi & Nakajima, 1958). There was no way to sink or even severely damage the American fleet in any conventional tactic. The solution was obvious. Guided weapons provide dramatically greater accuracy and lethality than unguided weapons, producing much greater damage per weapon unit and per sortie. The new tactic was adopted immediately. Large numbers of pilots initially qualified and experienced pilots and later air cadets with minimal training who were asked to volunteer, were assigned to "Special Attack" air wings, the official name of the Kamikaze units. Posing a threat to the aircraft carriers, the U.S. Navy feared Japan's determination to fight till death. E. Conclusion With Japan's determination to fight to the last man, woman, and child, as seen in Okinawa, the United States believed if they had invaded Japan in 1945, the casualty rates for both the American forces and the Japanese defenders would be staggering. If was to believe that they would be one million casualties of American forces of the invasion of Japan. While the Japanese soldiers and zealous citizens posed a threat, the Kamikaze units preyed on unsuspecting naval ships in the Pacific. Both of Japan's determination and Kamikaze attacks had prompted the decision of America's use of the atomic bomb. Threatening the structure of the American fleet and the safety of the soldiers, the commanders decided to utilize the atomic weapon on Japan at a small Japanese city of Hiroshima. ...read more.