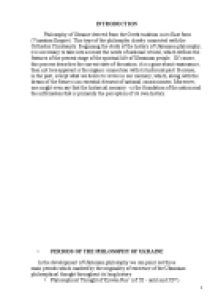 History and Philosophy of Ukraine

﻿INTRODUCTION Philosophy of Ukraine derived from the Greek tradition in its East form (Vizantian Empire). This type of the philosophy closely connected with the Orthodox Christianity. Beginning the study of the history of Ukrainian philosophy, it is necessary to take into account the needs of national revival, which defines the features of the present stage of the spiritual life of Ukrainian people. Of course, this process describes the current state of the nation. As is gone about renaissance, then not less apparent is the organic connection with its historical past. Because, in the past, is kept what we desire to revive in our memory, which, along with the dream of the future is an essential element of national consciousness. Moreover, one might even say that the historical memory - is the foundation of the nation and the information that is primarily the perception of its own history. 1. PERIODS OF THE PHILOSOPHY OF UKRAINE In the development of Ukrainian philosophy we can point out three main periods which marked by the originality of existence of the Ukrainian philosophical thought throughout its long history. 1. Philosophical Thought of Kyivan Rus? (of XI - until mid XIV). Spiritual and notional components: reflection of the Christian type of culture with accent on problem "man ? God"; morphological: the predominance of philosophical issues related to comprehension problems of individuals and historiosophical problems. ...read more.

Philosophy and great literature of Ukraine solved the questions ? problem of the human being, meaning of the human life and problem of the moral choice and social activity. It?s not accidentally, that famous Russian and Ukrainian poets and writers were at the same time good philosophers ( Alexandr Pushkin(1799-1837), Fedor Dostoevsky(1821-18810, Lev Tolstoy(1828-1910), Taras Shevchenko (1814-1861). Interested in purely personal and psychological issues they sought to develop new means of expressions in the art and literature. Some, mystically and spiritually oriented, insisted that science and scholarship could never lead to the ?higher truth? they sought, truth dealing with basic values and giving meaning and purpose to life. In the Philosophy of Ukraine we observed materialistic and idealistic tradition. Idealistic tradition was elaborated by Orthodox Christian thought, ?philosophy of the Heart?, and Sophiology, Russian and Ukrainian existentialism (from existence?). 1. ?Philosophy of the Heart? Dmytro Chyzhevsky ,the founder of the history of Ukrainian philosophy, often repeated claim that "'the philosophy of the heart? is the characteristic of Ukrainian thought." In making this claim he explained that "the philosophy of the heart" stands for three distinct theses: 1. that emotions have not only ethical and religious but also cognitive significance, 2. that conscious experience arises from a deeper source, a mysterious "abyss," and 3. ...read more.

Accepting economic growth, if it be guided by what they considered ethical norms, they were essentially reformers attempting to develop a liberal position that would suit condition of the country. Insisting on the importance of law and ethics in achieving an orderly and just transition to modernity, they emphasized self-discipline and a sense of responsibility for one?s actions. As time went one, they became more and more deeply Christian. CONCLUSION The person is the main subjects of Russian and Ukrainian philosophy. The person is considered as the manifestation of ultimate reality which cannot be reduced to the total of its own constituents. The most prominent Russian and Ukrainian thinkers devoted their lives to developing universal Christian world outlook. Reality is considered as a true, self-sufficient, universal and all-penetrating unity. Ukrainian philosophy made a valuable contribution to the doctrine of the substantial basis of the world as an intermediate medium between the final reality of God and the world, the sphere of our experience and action. The importance of Ukrainian philosophy which developed a number of the most important ontological, epistemological, aesthetic and social problems resides in the fact that it is probably one of the most synthetic and universal philosophies of the world, which anticipated many discoveries of particular sciences and can help find the ways of overcoming the universal spiritual crisis in which mankind found itself at the end of the 20th century. ...read more.