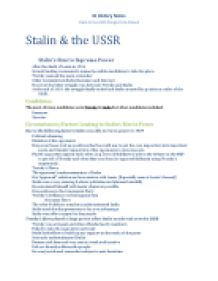 ﻿IB History Notes Stalin & the USSR (Single Party States) Stalin & the USSR Stalin?s Rise to Supreme Power After the death of Lenin in 1924 Several leading communists seemed possible candidates to take his place Trotsky seemed the main contender Other contenders included Zamenev and Zinoviev However the bitter struggle was between Trotsky and Stalin At the end of 1929, the struggle finally ended and Stalin secured his position as ruler of the USSR. Candidates: The most obvious candidates were Trotsky & Stalin but other candidates included: Kamenev Zinoviev Circumstances/Factors Leading to Stalin?s Rise in Power Due to the following factors Stalin was able to rise to power in 1929 Political scheming Mistakes of his opponents His power ...read more.

(Especially seen at Lenin?s funeral) Stalin was a very cunning & clever politician and planned carefully He associated himself with Lenin wherever possible His positions in the Communist Party Trotsky?s brilliance worked against him His many flaws The other Politburo members underestimated Stalin Stalin used the disagreements to his own advantage Stalin was able to appeal to the people Trotsky?s flaws played a large part in allow Stalin to take rule over the USSR Trotsky was arrogant and often offended party members Failed to take the opposition seriously Made little effort to build up any support in the ranks of the party Seriously underestimated Stalin Became sick later and was seen as weak and inactive Did not directly address the ...read more.

In this post, Stalin was in charge of the officials in the various republics outside Russia. Liaison Officer between the Politburo and the Orgburo (1919) This post, allowed Stalin to monitor party personnel and policy. Head of the Worker?s and Peasants? Inspectorate (1919) General Secretary of the Party (1922) Stalin played one side against the other to take power: First, he allied with Zinoviev and Kamenev to cover up Lenin?s Will and to get Trotsky dismissed (1925). Trotsky went into exile (1928). Then, he advocated ?Socialism in one country? (he said that the USSR should first become strong, then try to bring world revolution) and allied with the Rightists to get Zinoviev and Kamenev dismissed (1927). Stalin put his supporters into the Politburo. Finally, he argued that the NEP was uncommunist, and got Bukharin, Rykov and Tomsky dismissed (1929). ...read more.