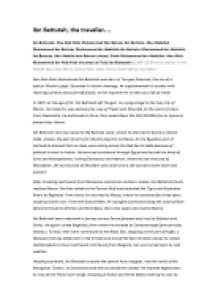 ﻿Ibn Battutah, the traveller? Ibn Battutah, Abu Abd Allah Muhammad (Ibn Batuta, Ibn Battuta, Abu Abdullah Muhammed ibn Battuta, Muhammed ibn Abdallah ibn Battuta, Mohammed ibn Abdullah ibn Battuta, Abu Abdulla ben Batuta Lahuati, Sheik Muhammad ibn-Abdullah, Abu Allah Muhammed ibn Abd Allah al-Lawati at-Tanji ibn Battutah) (1304?1378) Arab scholar in the Middle East, East Africa, central Asia, India, China, North Africa, and Spain. Abu Abd Allah Muhammad ibn Battutah was born in Tan-gier,Morocco, the son of a qadi,or Muslim judge. Educated in Islamic theology, he supplemented his studies with read-ings of texts about far-off places, which inspired him to take up a life of travel. In 1325, at the age of 21, Ibn Battutah left Tangier on a pilgrimage to the holy city of Mecca. He made his way eastward by way of Tripoli and Misurata on the coast of Libya. From Alexandria, he continued to Cairo, then sailed down the NILE RIVERas far as Syene at present-day Aswan. Ibn Battutah next journeyed to the Red Sea coast, where he planned to board a ship for Jidda, Arabia, the port of entry for Muslim pilgrims to Mecca. ...read more.

Heattempted to travel northward into Russia from Bulgaria, but was turned back by cold weather. Heading eastward, Ibn Battutah crossed the central Asian steppes, into the lands of the Mongolian Tartars, to Samarkand and the countryof the Uzbeks. He reached Afghanistan by way of the Hindu Kush range, stopping at Kabul and Herat before making his way by the upper Indus River into India. At Delhi, he entered the service of Sultan Mohammed Tuglaq, for whom he worked as judge and legal scholar for seven years. He then was commis-sioned as the sultan?s ambassador to the court of the Mon-gol emperor of China. He left Delhi with gifts for the emperor, but before he could embark from the Malabar Coast port of Goa, he was robbed. Afraid to return to Delhi without the gifts, he sailed for the Maldive Islands in the Indian Ocean, where he obtained another official post and several wives. After less than two years in the Maldives, Ibn Battutah visited Ceylon(present-day Sri Lanka), then returned to the mainland of southeastern India at Madras. ...read more.

In a subsequent journey, Ibn Battutah crossed the Strait of Gibraltar from Tangier and visited the Muslim cities of Spain. He also travelled throughout the lands of the western Mediterranean Sea, including a visit to the island of Sardinia. Ibn Battutah?s travels took him across 75,000 miles in Africa, Asia, and Europe, in the course of which he visited nearly every country in the Islamic world. In the east he reached as far as China, and to the south as far as Mali and the coast of East Africa. In the north, he traveled as far as the edge of the steppes of SIBERIA, and in the west he visited Spain. He was one of the first known explorers of the Sa-hara. His travel account, Rihla(Journey), completed in 1357, became known outside of the Arabic world after the French occupation of North Africa in the 19th century. The record of his travels provides a vivid description of the Mid-dle East, East and West Africa, India, and China in the cen-turybeforethe onset of the age of European exploration. In it, he makes the first written reference to the mountains known as Hindu Kush. Sources: Wikipedia.org Encyclopedia of Exploration ...read more.