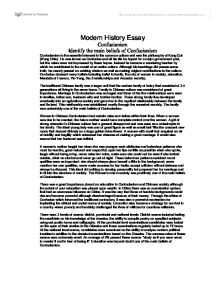 Identify the main beliefs of Confucianism and it's effects on Chinese society.

Modern History Essay Confucianism Identify the main beliefs of Confucianism Confucianism is the essential element in the common culture and was the philosophy of Kong Qui (K'ung Chiu). He was known as Confucius and all his life he hoped for a major government post, but the rulers were not impressed by these hopes. Instead he became a wandering teacher by which he contributed to the mould of an entire culture. Although his teachings did posses some truth, he merely passed on existing wisdom as well as making original contributions to the culture. Confucius stressed many beliefs including belief in family, the role of women in society, education, Mandate of Heaven, Yin-Yang, the 5 relationships and Ancestor worship. The traditional Chinese family was a larger unit that the nuclear family of today that consisted of 3-4 generations all living in the same home. Family in Chinese culture was considered of great importance. Marriage in Confucianism was arranged and three of the five relationships were seen in families, father-son, husband-wife and brother-brother. These strong family ties developed eventually into an agriculture society and gave rise to the mystical relationship between the family and its land. This relationship was established mostly through the ancestral worship. The family was undeniably one of the main beliefs of Confucianism. ...read more.

There were 3 levels of exams: district, provincial and national levels. District exams included testing the candidate on his knowledge of the classics, the ability to compile poetry on specified subjects using set poetic forms and calligraphy. At the provincial level examinations candidates were tested on the span of their studies in the Classics and these examinations regularly lasted up to 72 hours. At the national level exams, candidates were examined on the ability to analyse modern political troubles in addition to the standard examinations based on the Classics. The success rates of these exams were extremely small. An average of 2% passed these exams- "study as if you were never to master it and in fear of losing it". Education was beyond doubt one of the main beliefs of Confucianism. The Mandate of Heaven was a conviction that was positioned upon the leader of China. In its untimely form, this political theory asserted that heaven, T'ien, was primarily involved in the interests of human beings. For this motive it has established the governors and rulers who assume the responsibility for the interests of their people. It mandates that firm people are in charge; while they rule justly, fairly, and wisely, heaven upholds that certain rulers or dynasties linger in power. ...read more.

Respect for the hierarchy of the social classes, which upheld the structures of the traditional feudal society, was firmly rooted in the family. Power was in the hands of the older generations. The elder generation always dominated their juniors. The power of the older generations was absolute and even gave them the right to inflict harm on others who are inferior. The 5 relationships were unquestionably one of the main beliefs of Confucianism. Ancestor worship was one of the essential characteristics of the traditional Chinese family. It emphasised the strength of the ties that bound its members even beyond the grave- "We know perfectly well that the souls of the ancestors can not come and dwell in the tablets and cartouches that bear their names, but we try to convince ourselves that we are in their presence". The Chinese practiced the offering of gifts which varied according to district: pigeons, chickens, fruit, wine, wheat or rice. A component of every house was set aside for ancestor worship and, if the family was wealthy enough a temple would be erected. Ancestor worship was considered a principle belief in Confucianism as they believed pleasing ancestral spirits. In summary, the main beliefs of Confucianism were belief in family, the role of women in society, education, Mandate of Heaven, Yin-Yang, the 5 relationships and Ancestor worship. They were all equally important in ensuring the welfare and well-being of the Chinese society, which was their main focus within life. ...read more.