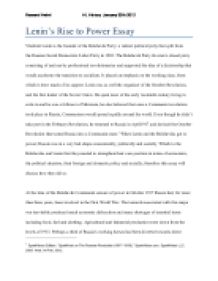 Lenin's Rise to Power Essay Vladimir Lenin is the founder of the Bolshevik Party; a radical political party that split from the Russian Social Democratic Labor Party in 1903. The Bolshevik Party favored a closed party consisting of and run by professional revolutionaries and supported the idea of a dictatorship that would accelerate the transition to socialism. It placed an emphasis on the working class, from which it drew much of its support. Lenin was as well the organizer of the October Revolution, and the first leader of the Soviet Union. He spent most of the early twentieth century living in exile in and he was a follower of Marxism, he also believed that once a Communist revolution took place in Russia, Communism would spread rapidly around the world. Even though he didn't take part in the February Revolution, he returned to Russia in April1917 and devised the October Revolution that turned Russia into a Communist state.1 When Lenin and the Bolsheviks got to power; Russia was in a very bad shape economically, politically and socially. Which to the Bolsheviks and Lenin that they needed to strengthen their own position in terms of economics, the political situation, their foreign and domestic policy and socially; therefore this essay will discuss how they did so. ...read more.

After taking power, the Bolsheviks promised to deliver 'Peace, Bread and Land' to the beleaguered people of Russia. With regard to the first of these, a 'Decree on Peace' (26 October 1917) was dashed off by Lenin, calling upon all belligerents to end the slaughter of World War One. Not that Lenin was a pacifist: rather, his hope was to transform the world war into an international civil war, when the 'imperialist' powers refused to cease fighting and thereby revealed their rapacious ambitions. However, the Central Powers responded to the Bolsheviks' appeal by agreeing to an armistice on the Eastern Front, and Lenin's lieutenant, Trotsky, found himself in the uncomfortable position, during the winter of 1917-18, of negotiating a separate peace treaty with Imperial Germany and her allies at the Polish town of Brest-Litovsk. This punitive treaty effectively handed over Finland, Poland, the Baltic provinces, Ukraine and Transcaucasia to the Central Powers, together with one-third of the old empire's population, one-third of its agricultural land and three-quarters of its industries. Outraged by this, the anti-Bolshevik Russians who had remained loyal to the Allies now took up arms in earnest against the Bolsheviks. They were actively assisted by Allied forces in Russia, who hoped to rebuild the Eastern Front. ...read more.

Many leaders and priests of Russian Orthodox Churches were imprisoned. Censorship also became a lot more systematic and by 1922 pre-publication censorship was introduced officially on books, articles and poems by creating the Main Administration for Affairs of Literature and Publishing Houses; which had to approve anything written before it was published to the public. The Cheka (Secret Police) also became official in that year and was renamed as the Main Political Administration; they harassed and arrested Nepmen regularly as class enemies in order to make sure the capitalistic tendencies were kept under control.4 Historiographers on this issue disagree on whether these measures were taken in order to actually stop the counter revolution's progress or because Lenin and the Bolsheviks felt like they needed to maintain their power and increase it. 1 SparkNotes Editors. "SparkNote on The Russian Revolution (1917-1918)." SparkNotes.com. SparkNotes LLC. 2005. Web. 04 Feb. 2012. 2 "Lenin The New Economic Policy." Faith vs Reason Debate Spiritual Insights Quotations Quotes Aldous Huxley Perennial Philosophy. Web. 04 Feb. 2012. <http://www.age-of-the-sage.org/history/new_economic_policy.html>. 3 Smele, Jonathan. "World Wars: War and Revolution in Russia 1914 - 1921." BBC.com. Web. 05 Feb. 2012. <http://www.bbc.co.uk/history/worldwars/wwone/eastern_front_01.shtml>. 4 Fiehn, Terry, and Chris Corin. "How Was the Bolsheviks State Consolidated between 1921 and 1924? 7B." Communist Russia under Lenin and Stalin. London: John Murray, 2002. 113-21. Print. ?? ?? ?? ?? Rawand Helmi HL History January 30th 2012 ...read more.