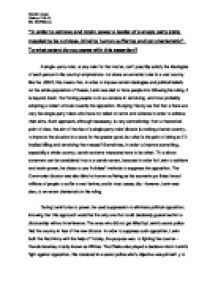 Lenin. &quot;in order to achieve and retain power a leader of a single party state meeded to be ruthless, blind to human suffering and yet charismatic&quot;

"in order to achieve and retain power a leader of a single party state meeded to be ruthless, blind to human suffering and yet charismatic". To what extent do you agree with this assertion?

A single- party ruler, or any ruler for that matter, can’t possibly satisfy the ideologies of each person in his country/ empire/state. Let alone an extremist ruler in a vast country like the USSR, this means that, in order to impose certain ideologies and political beliefs on the whole population of Russia, Lenin needed to force people into following his ruling. It is beyond doubt  that forcing people to do so consists in terrorizing  and most probably adopting a violent attitude towards the opposition. Studying History we find that a there are very few single-party rulers who have not relied on terror and violence in order to achieve their aims. Such approach, although necessary, is very contradicting: from a theoretical point of view, the aim of the rise of a single party ruler/ dictator is making a better country, to improve the situation in a state for the greater good, but what is the point of doing so if it implies killing and terrorizing the masses? Sometimes, in order to improve something, especially a whole country, certain extreme measures have to be taken. The above statement can be considered true to a certain extent, because in order for Lenin to achieve and retain power, he chose to use “ruthless” methods to suppress the opposition. The Communist dictator was also blind to human suffering as his economic policies forced millions of people to suffer a vast famine, and in most cases, die. However, Lenin was also, to an extent charismatic in his ruling.

During Lenin’s rise to power, he used suppression to eliminate political opposition, knowing that this approach would be the only one that could decisively guarantee him a dictatorship without interference. The ones who did not get killed by Lenin’s secret police fled the country in fear of the new dictator. In order to suppress such opposition, Lenin built the Red Army with the help of Trotsky, the purpose was  to fighting the counter-Revolutionaries, mostly known as Whites. The Cheka also played a decisive role in Lenin’s fight against opposition, this consisted in a secret police who’s objective was primarily to

keep the population under strict control and hunt down enemies of the leader in order to then eliminate them.

The Red Terror is a major event to evaluate in the consideration of the above statement, in fact, it perfectly depicts the ruthlessness Lenin had towards the Russian population. The Red terror was his reaction to the Czech Legion’s refusal of surrendering to the Bolsheviks. The secret police was created in 1917 with the purpose of managing the executions of those who were thought to be against  Lenin’s ideologies, the Cheka’s action was ruthless and terribly violent and resulted in the death of numerous individuals who were labeled as “enemies of the Bolsheviks”, among these were capitalists, university students, members of the ruling class, business owners and church officials. The Tsar and his family also saw their deaths during the red terror, marking the definitive end of the Tsarist era in Russia. However, Lenin did not only focus his hatred and terror on the civilian population, but also used the policy of “One Party Unity” to commit the killing of party members who questioned his authority. A famous quote by Lenin summarizes his beliefs against opposition as it states that "To overcome of our enemies we must have our own socialist militarism. We must carry along with us 90 million out of the 100 million of Soviet Russia's population. As for the rest, we have nothing to say to them. They must be annihilated.". We also find evidence that Lenin did not adopt terrorizing methods only to eliminate opposition: he also ordered the Cheka to arrest workers who refused to work on

Sundays who would then be sent to labour camps where they would most probably die. According to Lenin, in fact, those who retained themselves from working during week-ends , were counter revolutionaries

Lenin was without doubt “ruthless” and “blind to human suffering” as, mostly because of his economical attempt of achieving autarky, he caused the death of million of peasants and workers, who, forced to provide the state with a minimum of the product they cultivated, found themselves without resources, causing starvation and death. Never during his time in power, did Lenin ever show sorrow towards the suffering of his people, in

fact, he sustained the killing and the terror, and looked at his people’s suffering without any ethically positive reaction.

Historians have long evaluated Lenin’s ruthless approaches, and numerous came to the conclusion that “Lenin’s initiation of the Red Terror was essential for the Bolsheviks to retain power, as they had no support from the majority of the population”- Conquest.

Weather or not this was the ethically correct approach for a dictator to take isn’t the question, as the answer would obviously be no. The question we should try to answer was weather or not this was necessary; Lenin wanted to revolutionize Russia and had a very detailed plan through which he wanted to do so, but once he came to power, very few Russians found themselves to agree with the dictator’s ideologies. This inconvenient situation brought Lenin to force his policies onto his people, and instead of improving the issued country, he terrorized it.

It is clear, in my mind, that in order to rule over such a vast population and be successful with his dictatorship, a leader needs to impose his policies and ideologies through the use of terror and violence to a certain extent. Such approach would not have been necessary if Lenin, and any other dictator, would have had a more democratic and peaceful approach to their aims, listening to the people’s demand, and attempting to satisfy them. There is no consistent evidence of any attempt made by Lenin to please his people. All of his aims were carried out in an extreme way which, of course, did not agree with the people’s idea. Furthermore, Russia is a challenging example to apply the above statement to: Russia was one of the biggest and most populated countries in the world, making it extremely difficult to satisfy, even if the leader did try to do so, also, the population of Russia was generally uneducated resulting in opinions which were as inapplicable as the ones of the leader. Overall, weather or not it is necessary “to be ruthless, blind to human suffering” “in order to achieve and retain power” strictly depends on the country where such concept is applied to, but can be judged as correct to a certain extent in the case of an extremist leader of a single-party state.