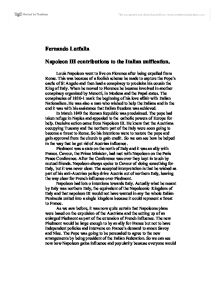 Fernando Lutfalla Napoleon III contributions to the Italian unification. Louis Napoleon went to live on Florence after being expelled from Rome. This was because of a foolish scheme he made to capture the Pope's castle of St Angelo and then lead a conspiracy to proclaim his cousin the King of Italy. When he moved to Florence he became involved in another conspiracy organized by Menotti, in Modena and the Papal states. The conspiracies of 1830-1 mark the beginning of his love affair with Italian Nationalism. He was also a man who wished to help the Italians and in the end it was with his assistance that Italian freedom was achieved. In March 1849 the Roman Republic was proclaimed. The pope had taken refuge in Naples and appealed to the catholic powers of Europe for help. Decisive action came from Napoleon III. He knew that the Austrians occupying Tuscany and the northern part of the Italy were soon going to become a threat to Rome. ...read more.

abolition of the old autocratic government, Victor Emmanuel and Cavour by the expansion of Piedmont, the clergy by the increase in the pope's temporal power, French nationalists by the gain of new territories and the replacement of Austrian influence by that of France and the Bonapartes by the extension of family power. Napoleon also had great contribution on the war 1859. When Piedmont refused an ultimatum of Austria, Austria declared war on Piedmont and Napoleon declared war on Austria helping piedmont. He sent troops and the Austrians were heavily defeated at Magenta on 4 June and Solferino on 24 June. However the carnage at both battles was horrific. The Austrian Emperor, Victor Emmanuel and Napoleon where all shocked at what they saw. As a military leader Napoleon was well intentioned but incompetent and quite unable to deal with the problems which faced him after sofrino. Some of these problems were the growing criticism in France of the whole Italian adventure and failure on military and financial support. ...read more.

This happened because at that time the Austro- Prussian war was happing to see who would unify with Germany. And so beforehand Italy made a deal with Prussia that if they went to war with Austria in two months, Italy will join them and if they won, Venetia would go back to Italy. So we can see how Napoleon insured a 100% guarantee that Venetia would go back to Italy. As in the case with Rome, it was liberated by the French troops when they went to fight the Franco-Prussian War. And as Napoleon was taking Prisoner Victor Emmanuel took over Rome. So we can see that unintentionally Napoleon contributed as when his troops left Rome, it led to a total Italian Unification. Overall, I think Napoleon contributed a lot to the unification as limited the Austrian influence in various places like Piedmont and helped the rest of the provinces to get under Italian influence. Also all of this happened because of his love affair with Italian nationalism. ...read more.