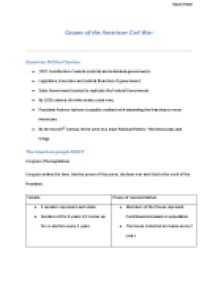 Notes on the Causes of the American Civil War

﻿Harsh Patel Causes of the American Civil War ________________ American Political System 1. 1787 Constitution- Federal (central) and individual governments. 2. Legislative, Executive and Judicial Branches of government. 3. State Government tended to replicate the Federal Government. 4. By 1820s almost all white males could vote. 5. President Andrew Jackson is usually credited with extending the franchise to most Americans. 6. By the mid 19th Century there were two main Political Parties ?The Democrats and Whigs. The American people ELECT Congress (The legislative) Congress makes the laws, has the power of the purse, declares war and checks the work of the President. Senate House of representatives 1. 2 senators represent each state 2. Senators sit for 6 years 1/3 comes up for re-election every 2 years. 1. Members of the House represent Constituencies based on population. 2. The house is elected en masse every 2 years. 1. Both house of congress need to agree before a law can be carried out. 2. Congress may override a Presidential veto. 3. Congress may impeach and remove the President from office. The president (The Executive) 1. Elected every 4 years 2. ...read more.

suggest that slave conditions were not so bad 6. Only a few hundred slaves per year tried to escape north or to Canada. 7. Some slaves were granted or earned enough to buy their freedom The Nature of Slavery- Harsh view 1. Slaves could be sold, punished, sexually exploited, and killed by the owners 2. Firm discipline and corporal punishment seems to be the norm (flogged and branded) 3. Slave families and marriages were broken by forced separation 4. By the 1850s few slaves were granted freedom 5. Most fugitive slaves were severely punished 6. Slaves took every opportunity to get out of slavery- The Civil war. Was Slavery Profitable? 1. The South had little incentive to industrialize 2. Slavery allowed for cotton profits to soar 3. By 1860? slavery was flourishing in the South 4. The global demand for cotton had not slowed as it was expected to. 5. Slavery on the other hand allowed the South to only focus on cotton and plantation life. Free Blacks In the North: Some 200 000 Blacks lived in the North. They suffered from discrimination only three states allowed blacks to vote on terms of complete parity with whites in 1860 In the South: By 1860 there were 250 000 free blacks in the South. ...read more.

Northerner?s and Taylor supported New Mexico 8. A clash between the state and the US army seemed imminent 9. Southerners called together a convention in 1849 in Nashville for all southern states to meet 10. Their main aim was to adopt some mode of resistance to Northern aggression 11. Bitter divides were created in Congress 12. Southerners were also enraged that Northern states were harboring fugitive slaves and not upholding the law The 1850 Compromise 1. Taylor was determined not to make concessions to the South. Talk secession did not worry him 2. Whig elder statesman Henry Clay was worried and offered the Senate a resolution of compromises 3. California was to be admitted as a free state 4. Utah and New Mexico were to be organized as territories without any mention of slavery 5. Slave trading should end in Washington, DC 6. A more stringent Fugitive Slave Act was intended to placate the South 7. Texas should surrender the disputed land to New Mexico. In return Congress would assume the $10 million debt which Texas still owed 8. July 1850- Taylor who opposed the compromise, died. Fillmore a Northern Whig took over. 9. Fillmore although sympathetic to Clay?s compromise could not prevent it from being defeated 10. Senator Stephan Douglas took each part of the compromise and submitted them individually 11. ...read more.