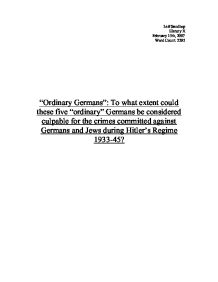 Ordinary Germans: To what extent could these five ordinary Germans be considered culpable for the crimes committed against Germans and Jews during Hitler's Regime 1933-45?

Leif Sandhop History X February 15th, 2007 Word Count: 2295 "Ordinary Germans": To what extent could these five "ordinary" Germans be considered culpable for the crimes committed against Germans and Jews during Hitler's Regime 1933-45? When on January 30th in 1933 the National Sozialistische Arbeiter Partei, short NSDAP, came to power no German could have ever imagined what their land was to resemble by 1945. Once a powerful nation, Germany lay in devastating destruction by the end of WWII. The human fatalities had been shocking, both in combat and at the home front. Millions of Germans were forced out of their houses. Never in history had this once proud country been in such misery. Beyond the physical destruction, Germans had been confronted with the moral devastation of defeat. Plus the inhumane war crimes that had been committed under Hitler had been discovered. Twelve million Jews had lost their lives in Konzentrationslager (concentration camps), medical experiments, mass shootings and other gruesome circumstances. This arouses a number of questions, who is to be responsible for the death of all these Jews, can it all be the responsibility of a single person named Adolf Hitler? The topic question of this very essay is whether "ordinary" Germans could be considered culpable of these crimes. The definition of culpable is to take blame or censure; be blameworthy. ...read more.

And this is was she was a mere soldier. She came from a peasant family and she was educated just very poorly. This was not very common for officials in high ranks. So she was accredited so highly purely due to her piloting skill. Max Schmeling did by no means support anti-Semitism. His close friend and manager Joe Jacobs was a Jew and even during the war he kept him in his position. He opposed these anti-Semitic nearly risking his life saving two Jewish boys during the Kristallnacht. Leni Riefenstahl reason why she collaborated with Hitler in the term of her artistic movies was purely because she saw in Hitler an artist just like her. This is what made their speculated closer ties with Hitler. She was not an anti -Semite as in her movies such as Olympia she shows the black runner who won the gold medal glorifying him just as well she glorified the German athletes. Although some of these facts demonstrate some of the persons as innocent as lambs, they also had evidence that was to the negative of their innocence. As some of these characters seem to be innocent, this might be a rushed choice to make. Some of these characters might have lied about their true intents to make themselves look better so they would have not have to face charges. ...read more.

Whether to his intentions to help Germany or not, I do not take into consideration as it to much evolves around speculation. Gertrud Scholtz-Klinik I believe to be culpable, she was a strong believer in the idealistic socialist Nazi society, and even worse taught the idea of Eugenics. Even till later after the war she was proud of this. The pilot Hanna Reitsch I believe to be not culpable even though she seemed to have close relations with Hitler. However, her only passion was flying and was a soldier like thousands of others. Schmeling I believe is one of the most obvious cases to call not culpable. Himself he risked his own life for Jews and refusing to collaborate with Hitler and the Nazis. Lastly, Leni Riefenstahl I as well believe not to be culpable as her intentions and collaborations were of artistic matters, and she did not seem to know what was happening to millions of the Jews in the concentration camps. Whether or whether not ordinary Germans are to be culpable is still to be a debateable question, however I believe only the highest of the highest male ranks should be found guilty. I believe so as Hitler never openly admitted speech about the concentration camps. No ordinary Germans could have known of the inhumane and repulsive treatment, to them it was just told their home were 'evacuated' because of the Germans that had lost housing due to the bombings of civil areas of the allied forces. ...read more.