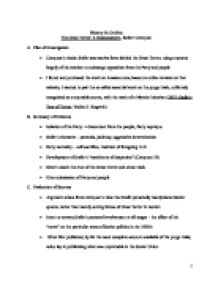 History IA Outline The Great Terror: A Reassessment, Robert Conquest A. Plan of investigation * Conquest's thesis: Stalin was motive force behind the Great Terror, using a system largely of his creation to submerge opposition from the Party and people * I found and purchased the work on Amazon.com, based on online reviews on that website; I wanted to pair the so-called essential work on the purge trials, uniformly recognized as a reputable source, with the work of a Marxist historian (1937: Stalin's Year of Terror, Vadim Z. Rogovin) B. Summary of Evidence * Isolation of the Party -> disconnect from the people, Party mystique * Stalin's character - paranoia, jealousy, aggressive determination * Party mentality - self-sacrifice, tradition of foregoing truth * Development of Stalin's "machinery of despotism" (Conquest 35) ...read more.

* Deals directly with issues of documentation: "It was a matter of balancing and assessing incomplete, partial, and uneven material" (Conquest ii), with references in the body of the work to changes made since the last edition * Particularly interesting and well argued assertion: "After the first executions, no oppositionists of any standing were in a position to attempt assassination whether they thought it suitable or not" (Conquest 106), due to the loss of the myth of security within the Party * Some points could be developed more fully: "Lenin (often a poor judge of men)" (Conquest 10) is somewhat jarring as it stands, as is the assertion, "No doubt all revolutions are doomed to vulgarization" (Conquest 59); both could be expanded effectively * Also, work identifies some of its own limitations in documentation, e.g., that "the bare facts" of Stalin's childhood "are in dispute" (Conquest 55) ...read more.

and explanation of particular political context that would allow for a purge then * Mentions in the body of the work corrections since the last edition; to some extent calls into question Conquest's methodology, as he probably should have made note of questionable data originally; his preface does establish that, now, most information is known beyond reasonable doubt * Conquest fulfills his intent, delivering a convincing account of Stalin at the forefront of the Great Terror E. Conclusion * This work a strong basis for a larger research paper, as it is clear, reasonable, and well-documented; thesis supported well, and only mild documentation limitations * Also, broad enough to introduce a number of areas of interest in terms of the causes, course, and implications of the purge trials F. ...read more.