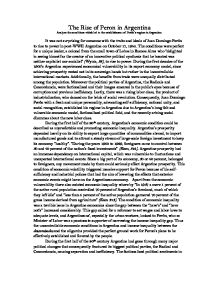 The Rise of Peron in Argentina Analyze the conditions which led to the establishment of Peron's regime in Argentina It was not surprising for someone with the traits and ideals of Juan Domingo Per�n to rise to power in post-WWII Argentina on October 17, 1945. The conditions were perfect for a unique leader, a colonel from the small town of Lobos in Buenos Aires who "delighted in seeing himself as the creator of an innovative political synthesis that he boasted was neither capitalist nor socialist" (Wynia, 38), to rise to power. During the first decades of the 1900's Argentina experienced economical vulnerability in its export economy model, since achieving prosperity rested not in its sovereign hands but rather in the incontrollable international markets. Additionally, the benefits from trade were unequally distributed among the population. Moreover the political parties of Argentina, the Radicals and Concordancia, were factionalized and their images smeared in the public's eyes because of corruption and previous inefficiency. Lastly, there was a rising labor class, the product of industrialization, who danced on the brink of social revolution. ...read more.

Thus the uncontrollable economic conditions in Argentina and income inequality between the descamisados and the oligarchs provided the perfect ground work for Peron's plans to be effectively established and favored by the people. During the first half of the 20th century Argentina had gone through many major political changes that consequently fractured its biggest political parties, the Radical and Concordancia, causing separation and inefficiency. The factionalized political sentiments in Argentina worked as a condition for Peron to rise to power since he promoted national unity in order to make Argentina into "a great nation". Historian Wynia describes that the Radical Party and Concordancia, "plagued by internal division and embarrassed by [their] collaboration with the ruling oligarchs before the war, seem to have lost [their] drive and originality...and inspired little confidence in their ability to offer anything new when conditions demand[ed]" (Wynia 33). Keen, another historian, continues describing the parties as "possessing inherent contradictions in their strategies... and with uneven promises" (Keen 318). For many years the people of Argentina relied on promises of politicians to patch up the evident economic dilemmas and social instabilities, but results varied. ...read more.

This condition of the social labor class on the brink of struggle with the system was the key condition for Per�n's rise to power since he was a government official close to the people, the Minister of Labor. Per�n was the ideal man to confront the most dramatic social turmoil that was happening in Argentina in 1945, labor mass demonstrations similar to those in 1919. Before he was elected president, he managed to stop the "Liberty March" by the General Confederation of Labor (CGT) by giving it political recognition. Thus, Per�n won the support of the oligarchs, whose money he saved, and the workers, whom he recognized. When Juan Domingo Peron stepped into power in October 17, 1945 it was not a surprise. The conditions were right for his economic plan of self sufficiency, his national political unity proposals, and his social recognition declarations to be attractive to Argentina's population. Peron's ideology and traits established themselves in Argentina because of vulnerable national economic conditions and the social harms they created, factionalized political parties with little support from the people, and the new social questions about the labor class that Peron effectively responded to. ?? ?? ?? ?? ...read more.