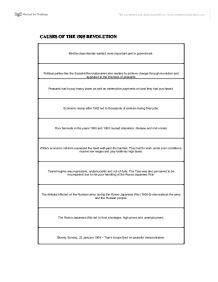 CAUSES OF THE 1905 REVOLUTION Middle-class liberals wanted more important part in government. Political parties like the Socialist Revolutionaries who wanted to achieve change through revolution and appealed to the interests of peasants Peasants had to pay heavy taxes as well as redemption payments on land they had purchased. Economic slump after 1902 led to thousands of workers losing their jobs. Poor harvests in the years 1900 and 1902 caused starvation, disease and civil unrest. Witte's economic reforms squeezed the least well-paid the hardest. They had to work under poor conditions, receive low wages and pay relatively high taxes. Tsarist regime was repressive, undemocratic and out of date. The Tsar was also perceived to be incompetent due to his poor handling of the Russo-Japanese War. The defeats inflicted on the Russian army during the Russo-Japanese War (1904-5) demoralised the army and the Russian people. The Russo-Japanese War led to food shortages, high prices and unemployment. Bloody Sunday, 22 January 1905 - Tsar's troops fired on peaceful demonstrators. Nationalist minorities wanted an end to policy to Russification. Population expansion put increased pressure on land and food supplies. Economic Causes: The combination of a population explosion, backward farming techniques and poor policy making had made for a grave crisis in agriculture. A devastating famine in 1891 and 1892 had driven many peasants to the cities in search of employment and food. A formative labor movement began to develop as industrialization took place. From the later 19th century, the Tsars had been keen to see Russia become an industrial power. The senior minister Sergei Witte introduced policies that led to rapid industrial growth. Oil and coal production trebled, while iron production quadrupled. Some peasants left the land to work in these newly developing industries. However, their living conditions hardly improved. By 1900, more than two million industrial workers were concentrated in a few major cities of European Russia. ...read more.

These arrangements proved very unsatisfactory to the peasants. Firstly, their share of the village land was often insufficient to keep them above the level of grinding poverty. (It has been estimated that only 1/3 of the total area of agricultural land was given to the village communities; while more than 1/3 was kept by the state and the Imperial family, and 1/4 was till kept by the nobles.) Secondly, their annual sums to the government were often heavier than the dues (or rents) they had formerly paid to the nobles. Thirdly, the land of the village communities was often infertile because the nobles were allowed to give up the poorest parts of their estates to the peasants and kept the best parts for themselves. Fourthly, the village communities kept the village land as collective property. As the population of the village continued to increase, at each re-allotment of land the share of land granted to each peasant would become smaller and smaller. After the emancipation, peasant discontent increased and peasant riots continued up to 1917. (ii) The creation of the Zemstva (1864) and the Town Councils (1870): Before the reform, the administration of countryside was dominated by the nobles. The reform of 1864 created district and provincial assemblies (zemstva). The members of the district assemblies were elected by the inhabitants of each rural district, peasants and nobles alike. Members of the district assemblies then elected delegates of the provincial assemblies. This system of election tended to cut down the power of the nobles and gave more political right to the non-noble classes. The assemblies were responsible for the administration local education and public health, the upkeep of roads and bridges, the encouragement of industry and agriculture and the election of the Justices of Peace. This was the first experiment in self-government in Russia and encouraged the Russians to demand for more political power in the future. ...read more.

(ii) The Social Revolutionary Party: While the Social Democratic Party appealed to the workers for support, a new party arose, which appealed to the peasants for support. This was the Social Revolutionary Party. Like the Social Democratic Party, the Social Revolutionaries believed in an imminent bourgeois revolution and the subsequent overthrow of the bourgeois government by a socialist revolution. But the Social Revolutionaries differed from the Social Democrats in three ways: first they gave to the peasantry a greater and more independent role in the revolutionary process; secondly, they thought that all land should be the property of the State and the State should parcel out land to all peasants on the basis of their labour ownership (In other words, those peasants who had greater labour force would be given more land); thirdly, they concentrated on assassination and other terrorist methods to achieve their goals. How did the Revolution of 1905 lead to the 1917 Russian revolution? The Tsar survived the 1905 revolution, but some serious questions remained. The most serious was the possibility of another revolution. If he was to prevent this, Nicholas needed to reform Russia and satisfy at least some of the discontented groups that had joined the revolution in 1905. The Duma deputies who gathered for its first meeting in 1906 were hopeful that they could help to steer Russia on a new course. They were soon disappointed. The Tsar continued to rule without taking any serious notice of them. The first and second Dumas were very critical of the Tsar. They lasted less than a year before Nicholas sent them home. In 1907 Tsar Nicholas changed the voting rules so that his opponents were not elected to the Duma. This third Duma lasted until 1912, mainly because it was much less critical of the Tsar than the previous two. But by 1912 even this 'loyal' Duma was becoming critical of the Tsar's ministers and policies. However, it had no power to change the Tsar's policies and criticism alone was not a serious threat to the regime so the Tsar's rule continued. ...read more.