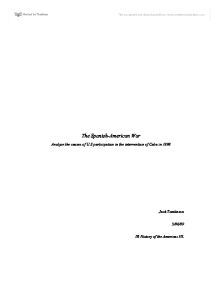 The Spanish-American War Analyze the causes of U.S participation in the intervention of Cuba in 1898 Jack Tomlinson 3/06/09 IB History of the Americas HL The U.S intervention in Cuba during its revolts against Spain was one of the United States' earlier interventions. At the time of the war with Spain the United States was only a few decades old. Around that period the U.S interventions were increasing in number as the U.S had intervened with the Philippines, Cuba and several others. "This was a curious conflict. Although it added materially to the colonial possessions of the United States, the war of 1898 was not originally a territory-grabbing venture. Although it yielded results which pleased businessmen, it was not at first desired by business leaders. And though victory over Spain would help William McKinley win re-election, the President long delayed asking Congress for a declaration of hostilities. (Bethell, 435)" The United States' decision to intervene in the Cuban Revolts with Spain (thus leading to war with Spain in 1898) was due to several reasons such as the U.S citizens support for Cuban independence and the arguments made by U.S President McKinley to Congress. ...read more.

"William Randolph Hurst of the New York Journal and Joseph Pulitzer of the New York World were two of many leaders in this field. Mixing appeals for liberty with stories about Spanish atrocities, these newspapermen turned American sympathy for Cuba into a crusade to save the Cubans. By 1897 aroused citizens were contributing money, volunteering for service in the Cuban forces, and petitioning Congress and the President to take action against Spain" (Curtis, 323) Another one of the major causes that led the U.S government to issue a declaration of war against Spain was President McKinley's speech with Congress. "McKinley was at heart a cautious and peaceful man. As a religious man and humanitarian, the President was impressed by the anti-Spanish views of religious leaders. As a professional politician, he was aware that the people wanted war. This was notably the case after the DeLome letter and the destruction of the Maine. The letter was a foolish private communication from the Spanish minister in Washington, denouncing McKinley" (Curtis, 333) When published, it increased anti-Spanish sentiment in the United States. ...read more.

The last point he argued was one of most importance, that being that the "present condition of affairs in Cuba is a constant menace to our peace, and entails upon this Government an enormous expense" (State). He does so by emphasizing the destruction of the Maine. "In any event the destruction of the Maine, by whatever exterior cause, is a patent and impressive proof of a state of things in Cuba that is intolerable. That condition is thus shown to be such that the Spanish Government cannot assure safety and security to a vessel of the American Navy in the harbor of Havana on a mission of peace, and rightfully there" (State). The intervention of Cuba by the United States was caused by several reasons that involved sympathetic notions. It was one of the United States' earlier interventions as the U.S was only a few decades old. At the finale of this intervention the United States had defeated Spain and Cuba was free from its mother country. The United States' decision to intervene in the Cuban Revolts with Spain (thus leading to war with Spain in 1898) was due to several reasons such as the U.S citizens support for Cuban independence and the arguments made by U.S President McKinley to Congress. ...read more.