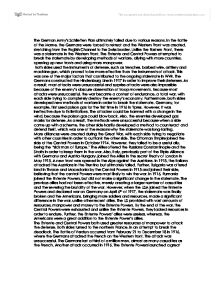 The German Army's Schlieffen Plan ultimately failed due to various reasons. In the Battle of the Marne, the Germans were forced to retreat and the Western Front was created, stretching from the English Channel to the Swiss border. Unlike the Eastern Front, there was a stalemate in the Western Front. The Entente and Central Powers attempted to break the stalemate by developing methods of warfare, allying with more countries, opening up new fronts and using more manpower. Both sides used the instruments of defense, such as trenches, barbed wire, artillery and machine gun, which proved to be more effective than the instruments of attack. This was one of the major factors that contributed to the ongoing stalemate in WWI. The Germans constructed the Hindenburg Line in 1917 in order to improve their defenses. ...read more.

The Ottoman Empire joined the side of the Central Powers in October 1914. However, they failed to be a useful ally, being the "sick man of Europe." The Allies offered the Russians Constantinople and the Straits in order to keep them in the war. Also, Italy, previously part of the Triple Alliance with Germany and Austria-Hungary, joined the Allies in the secret Treaty of London in May 1915. A new front was opened in the Alps against the Austrians. In 1915, the Italians attacked the Austrians in the Trentino but ultimately failed. Further, Bulgaria was offered land in Thrace and Macedonia by the Central Powers in 1915 and joined their side, believing that the central Powers were most likely to win the war. In 1916, Rumania joined the Entente Powers, but did not make a significant change in the stalemate. ...read more.

The Battle of Verdun occurred from February 21 to December 18 in 1916, where the Germans attacked the French on the Western front. The attack was unsuccessful. The Germans lost a third of a million men, almost as many casualties as the French. Another attack occurred in 1916. The Entente Powers launched a great offensive along the river of Somme, while the Germans prepared an attack in Verdun. The Battle of Somme, which occurred from July 1 to November 18, involving the colonies of Britain, including Australia, New Zealand, Canada, and South Africa. The Allies attempted to break through German lines. It was an indecisive victory, with no clear winners. The British and French captured a little more than five miles, and the French lost 200,000 men and the Germans lost nearly 500,000 men. The Battle of Verdun and the battle of Somme were ineffective with no clear winners. The attacks were unproductive and failed to break the stalemate. ...read more.