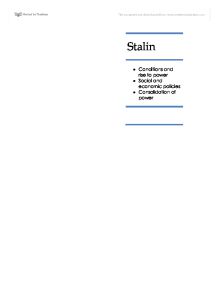 Stalin's rise to power, his policies and how he consolidated his grip on power.

Stalin * Conditions and rise to power * Social and economic policies * Consolidation of power CONDITIONS AND RISE TO POWER Rise to power * When Lenin died in January 1924, the question on who would be his successor was still unanswered. * Initially, Stalin's chances seemed remote especially in view of Lenin's Testament and its codicil, which were read out at a meeting of the Party Central Committee. * However, the other party members agreed that Stalin had improved his reputation during the course of 1923 and therefore voted to put aside the recommendations of the codicil. * Meanwhile, Kamenev and Zinoviev came to the conclusion that Trotsky was the main threat to the Party's stability thus paving the way for Stalin's succession effectively. * They collaborated with Stalin, with a power sharing Triumvirate emerging, with Stalin remaining in his post of General Secretary. * Indeed, Stalin's total control of the party in 1929 can be attributed to three main phases: 1. Between 1923 and 1925, a major split between the Triumvirate and Trotsky emerged, expressed in ideological debate between 'Permanent revolution' and 'Socialism in one country'. * Stalin was far less deeply committed to the economic principles of the 'right-wing' strategy than Trotsky was to the 'left', his motive being the political isolation of Trotsky. * In this he succeeded as in 1925 at the 14th Party Congress he received overwhelming support, though not from Kamenev and Zinoviev. ...read more.

Chronology * Initially, in 1927, collectivisation was simply "encouraged" with the hope that the peasants would willingly work together with socialist parties in agriculture. * However peasants were not willingly collectivising and in 1928 Stalin became convinced that kulaks were indoctrinating the poorer peasants to avoid collectivisation. Dekulanisation was therefore carried out, with communists rallying the poorer peasants to drive out kulaks. By March 1930, 15 million people had been forced into collective farms. * Collectivisation was temporarily relaxed, however, due to the perceived over-zealousness of officials. Some 9 million people were taken out of the collective farms, demonstrating Stalin's power over the USSR. * In early summer 1930 collectivisation was reinstated but in a slower manner, however, by 1932 all peasants were put into larger "Kolkhozes." These were state run plots and peasants had to produce a quota of grain. Results * Peasants became alienated, with many consuming their crops and slaughtering their livestock in order to spite the authorities. They responded with fiercer coercion. * There was also a disastrous fall in livestock as well as grain production, with cattle falling from 70 million in 1928 to 34 million whilst pigs fell from 26 million to 9 million. Meat production did not reach pre-collectivisation levels until after 1953. * Grain production fell from 73.3 million tonnes in 1928 to 67.7 tonnes in 1934 and collectivisation failed in its aim of raising capital for industrialisation. ...read more.

Nature of the purges * Workers who refused to back industrialisation were accused of sabotage and any peasant that resisted collectivisation was also purged. * Additionally around 1 million supporters of Ryutin, the former Moscow Party Secretary who had denounced Stalin, were tried and expelled from the party between 1933 and 34 thus being an example of a non-violent purge. * Show trials were held between 1936-8 to lend an air of legitimacy to Stalin's purges and Stalin revealed the extent of the conspiracy against him and got people onside, proving the need for the purges to continue. * The army were themselves purged with Tukhachevsky and seven other generals being accused of treason, when in reality they had simply voiced opposition against collectivisation. All were found guilty and shot. * Furthermore, eleven war commissars were removed, seventy-five of the eighty men in the Supreme Military Council were dismissed and half of all the commissioned officer corps were shot or imprisoned and all of the USSR's navy admirals were shot, leading to incompetent replacements. * Ordinary Russian people were also purged, especially minorities, in order to keep them under submission and writers, artists, academics, lawyers, historians, priests, scientists and other people were also purged. Censorship * This was rife in theatre and film with many films being removed out of circulation or withdrawn and many writers who in anyway denounced Stalin and his regime were also censored and often killed or sent to gulags. ...read more.