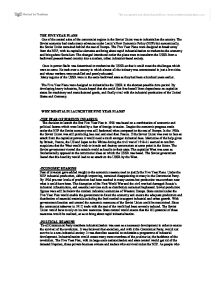 THE FIVE YEAR PLANS One of the central aims of the communist regime in the Soviet Union was to industrialize the country. The Soviet economy had made many advances under Lenin's New Economic Policy (NEP) but economically, the Soviet Union remained behind the rest of Europe. The Five Year Plans were designed to break away from the NEP, with its capitalist elements and bring about rapid industrialization to modernize the economy and bring about Socialism. The changed introduced under the plans were to transform the USSR from a backward peasant-based country into a modern, urban industrial-based society. Once in power Stalin was determined to modernize the USSR so that it could meet the challenges which were to come. He took over a country in which almost all the industry was concentrated in just a few cities and whose workers were unskilled and poorly educated. Many regions of the USSR were in the same backward state as they had been a hundred years earlier. The Five Year Plans were designed to industrialize the USSR in the shortest possible time period. By developing heavy industries, Russia hoped that she could first free herself from dependence on capitalist states for machinery and manufactured goods, and finally rival with the industrial production of the United States and Germany. ...read more.

In one Moscow factory there were over half a million norms set for different taks! Wages were decided by a workers success or failure to reach these norms. During a single nightshift in August 1935 Alexei Stakhanov cut 102 tons from a coal seam in the Dunbass region. This remarkable achievement was 14 times the quota or norm set for a shift! In a few months Stakhanov was a household name in the USSR; thousands tried to emulate him in ever sector of the economy. This was no doubt encouraged by the party, but within a year almost one-quarter of industrial workers were classed as Stakhanovites, with as many others graded as shock workers, a slightly lower but honoured category. The planners were then able to increase industrial norms between 10 and 15 per cent in 1936. The rapid spread of Stakhanovism does suggest to some historians a freat level of commitment to the government's vision of the future. More cynical observers argue that workers simply wanted the benefits the status brought. 5. FEAR Managers and technicians were made personally responsible for their work. Failure to meet targets could be serious. The period of the Plans was punctuated by a series of industrial trials in which managerial and technical staff were accused of sabotage. Since they had often held senior positions before the Revolution or had parents from a bourgeois background, they were easy targets. ...read more.

The Third Plan, 1938-1942 The Third Five-Year Plan ran for only 3 years, up to 1941, when Russia entered the Second World War. As war approached, more resources were put into developing armaments, tanks and weapons. The first two years of the Third Five-Year Plan proved to be even more of a disappointment in terms of proclaimed production goals. Even so, the value of these goals and of the coordination of an entire economy's development of central planning has been undeniable. For the 12% to 13% rate of annual industrial growth attained in the Soviet Union during the 1930s has few parallels in the economic history of other countries. Since Russia's economy had always lagged behind the rest of Europe, these increases appeared all the more dramatic. Additionally, this high rate of growth was continued after World War II, as much devastation needed to be repaired, and continued into the early fifties, after which it had gradually declined Though most of the targets set in the Five Year Plans were never fully achieved, the total output of the USSR did increase significantly. By 1940 the USSR would be the second largest Industrial power in the world at the expense of millions of people who died from starvation diseases or abuse in prison and forced labor camps. The economy flourished in the early years of the plans but in the end, the people came to detest the plans and a painful and costly period in their country's history. PROLETARIATISATION: ...read more.